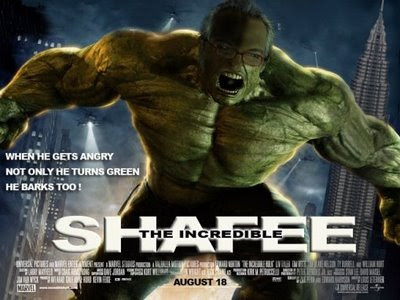 Is this the same Muhammad Shafee Abdullah? The Human Rights Commissioner of SUHAKAM (HUMAN RIGHTS COMMISSION OF MALAYSIA).

His deeds, threats and action on Raja Petra and the commenters on the website of Malaysia-Today bring a shiver to the spine. If a commission member of the very institution that is supposes to protect its people from the foundation of basic human dignity, act in such a manner, oh' what misery it brings to this society of ours. This reminds me of the speech by Kenneth Roth, the director of the international Human Rights Watch titled “Despots Masquerading as Democrats” in one of my posting HERE.

Allow me to refresh your memory, the basic foundation on the United Nations, Universal Declaration of Human Rights (UDHR) as adopted by SUHAKAM and recognized as International Human Rights Law is founded upon the four pillars;

The freedom from fear and want and the freedom of speech and belief.

Article 19 of the UDHR
Everyone has the right to freedom of opinion and expression; this right includes freedom to hold opinions without interference and to seek, receive and impart information and ideas through any media and regardless of frontiers.

And as a human rights defender, if Shafee thinks that he is one and I presumed that by virtue of him being a member of the commission that he is. His police report on Criminal Defamation, Sedition, and etc are the very things that Human Rights Organizations and other Institutions worldwide have campaigned against as it contravenes the basic human rights of “Freedom of Speech and Expression”. (Read earlier postings HERE).

Shafee has called Raja Petra all sorts of names like Pariah, Coward and etc and challenged him to sue. As a human rights commissioner he more than others should respect the institution that he upholds and not to lose composure and in the process blemishes the institution that he represents.
Statement from Amnesty International
"Throughout the world individuals face harassment and imprisonment as a result of exercising their right to freedom of expression. Everyone has the right to seek, receive and impart information and ideas without fear or interference.This right is important for the personal development and dignity of every individual and is vital for the fulfilment of other human rights. Freedom of expression has always been a core part of Amnesty International’s work and is closely linked to the right to hold opinions and the right to freedom of thought, conscience and religion."
Human rights are the foundation of human existence and coexistence. Human rights are universal, indivisible and interdependent. Human rights are what make us human. They are the principles by which we create the sacred home for human dignity. ~ Kofi Annan
Posted by Unknown at 3:31 AM

I was wondering..by your article, do you mean that freedom of speech means the law of defamation should be abolished? I thought all society and all religions have and teach restraints. Surely, you are not advocating absolute freedom of expression which means one can lie or defame or cause anarchy? Please elaborate.

hi jackie,
The freedom of speech is universal and accepted through the united nations UDHR.
laws of libel and defamation is also part of the UDHR under article 12. (pls refer to link in post)

If one is being defamed or slander than you have the recourse of civil law and NOT criminal defamation under criminal law which is draconian in nature as it intimidates and extol fear to society.

Even now in country like Indonesia there is a Freedom of EXpression Act and Freedom of Information Act.

These are basic incredients as realised and accepted by even "progressive" authoritarian regime for the growth of civil society and nurtures creativity and innovation in this fast paced world of today.

Go through the Must Read Label for further reading on this topics.