Plight of the Malaysians from Singapore 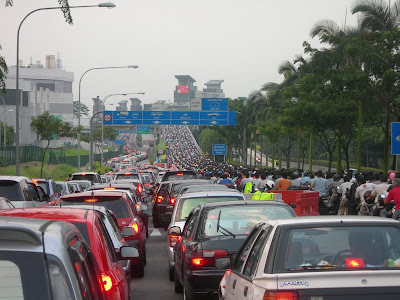 (Towards the Woodlands checkpoint) 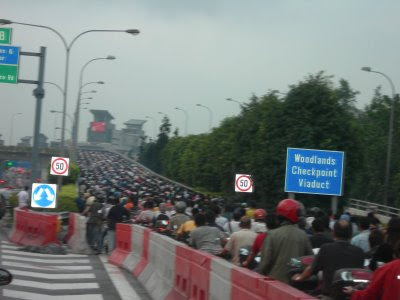 (Tens of thousands of Motorcyclist) 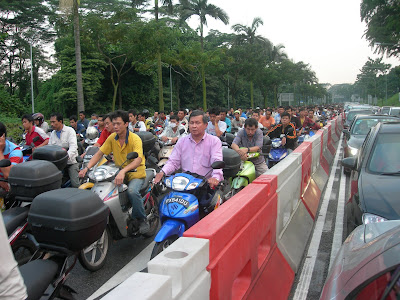 We were travelling back from the Lion City on the eve of merdeka hoping to use the second link from Tuas, Singapore to Tanjung Kupang in Johor, and were met with a massive traffic jam (estimated to be more than 6 km of cars in the queue) leading to the Tuas checkpoint and on checking the time as it was about 4.45pm we decided to try the main causeway to johor bahru and that we might as well stop there for our dinner break before heading towards Kuala Lumpur.
And on towards the old causeway we were caught as expected but we were hoping for better traffic conditions, and so we reluctantly joined the very long queue of cars patiently meanwhile we see a continous flow of motorcycles passing us. And as we inch nearer after almost an hour in this traffic crawl we saw this massive columns of motorcycles.
You could see that these motorcyclist were all prepared and had expected this traffic queue towards the Singapore immigration checkpoint as some were reading a book or magazine and some busy chatting on the mobile phone and some even took the time to have some food they had brought along. We were caught in this traffic for more than 2 1/2 hours and that this is inhuman and a daily ordeal for these Malaysians working in Singapore.
This old causeway is much more older than the 51 years of Merdeka for Malaysia as it was built in the year 1923 making this an 85 yeears old land bridge. Both the second link and the old causeway is unable to cope with the high amount of traffic flow at peak hours.
Both the Malaysian government and the Singapore government should look into resolving the ordeal of these people who contributes to both the economy of this two country. These mostly Malaysians in this massive traffic crawl is also a threat to the health for being exposed to the continous exhaust of carbon monoxide from the vehicles.
There are about 400 to 500 thousand Malaysian working in Singapore and it is estimated that more than 200,000 people travels to and fro daily or weekly. These Malysians contribute to the exchange earnings for their home country and towards the economic growth, productivity an development of Singapore where they work.

Don't these people deserve more than being tormented through this daily pain of travelling through this health threatening and time consuming and frustrating ritual?
Posted by Unknown at 5:15 PM

Hawk, game of black-jack is my way of spending the two hour crawl productively (win or lose).

The new bridge would have solved the problem and was cancell by Badawi PM of Malaysia.

anon,
Not sure about badawi cancelling the bridge project. but there should be other ways to efficiently clear the traffic at immigration checkpoint.