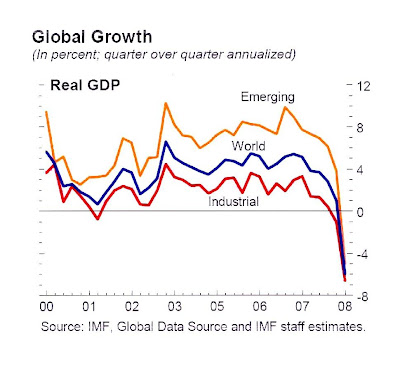 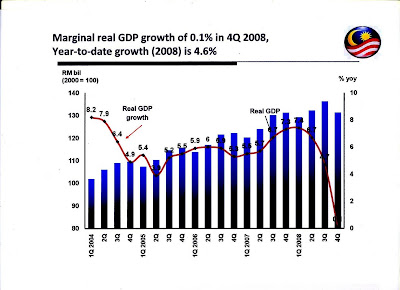 The funny thing is that you still get quite a few topics from people asking that "Is Malaysia in recession?" or "Can we avoid a recession?" or "Are we in recession yet?".
As far as i am concerned, we have since many months ago gone into an economic recession despite what the government is trying to deny otherwise, and i can never comprehend what or where is the problem by explaining the fact that we are in recession? The proclaimation of an official economic recession allows the people to be forewarned and to take the necessary steps to brace for tougher times ahead. A timely official announcement of a recession can also initiate early planning and actions to counter the impact of a slowdown in economic activity. It is only prudence and a reflection of good governance.
Look at the chart above and you will see that the GDP contraction started in the 2nd quarter of 2008 and throughout every other quarter. The global growth chart actually shows you that global growth was already slowing down way back in the middle of 2006 and that is why NBER declared the US in recession in 2007 (read further below). The signs were already written in the stars.
The world is in recession and why not Malaysia?
This denial is beyond my understanding.
DEFINITION
It has been a general consensus among economist in the definition of a recession is two consecutive quarters or six months of GDP contraction or decline.
The National Bureau of Economic Research (NBER) is the authority for the confirmation or announcement of an economic recession in the US. And in fact the NBER had earlier announced a recession in the US on the 1st December 2008 (GO HERE).
The NBER definition of an economic recession is "a significant decline in economic activity spread across the economy, lasting more than a few months, normally visible in real GDP, real income, employment, industrial production, and wholesale-retail sales." 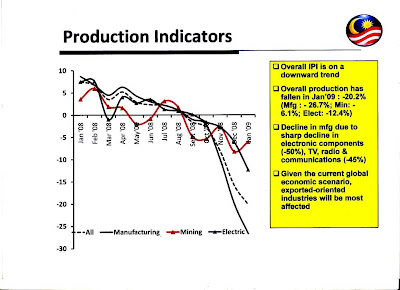 Lets look at some indicators as shown above are the Industrial Production indicators which is on a downtrend since the beginning of January '08 and the alarm should be ringing much earlier way on before the world stock market crash of Oct'08. I don't expect our government to be able to forsee this global economic crisis to happen but lets not be in denial. 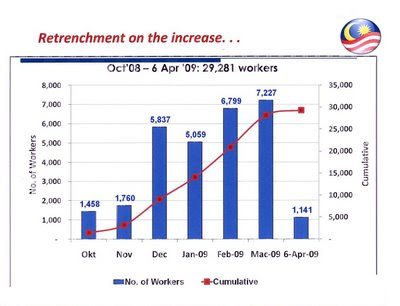 The general impact of any recession is hardship brought about by loss of income by the working class and losses of business profit and insolvency. Lets look at the official figures of retrenched workers totalling to about 28,000 workers as at March '09 (chart above) although some thought that the numbers are much higher as the official figures does not take into consideration of Malaysians working overseas or those working in Singapore and it is estimated that just those retrench workers from Singapore alone is more than the official numbers of 28,000 and many numbers have been thrown around and you can't blame people for guessing as there are no statistic available.
The function of any good government is to assist the affected workers and to provide relief and alternate arrangement towards the welfare of its people as families of the old and young from the lower income group will be most affected. 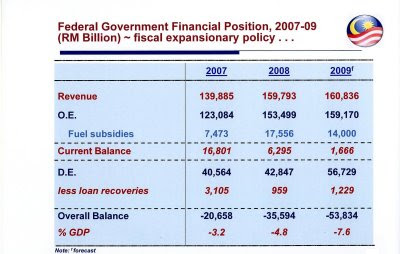 FINANCIAL PRUDENCE
The financial prudence of a government is to save and create reserves during good times so that when times like this comes around you have some savings and real cash which will be more efficient in tackling the economic downturn.
The chart above shows the government financial position which shows a deficit forecast for year 2009 amounting to RM 53.8 billion. So we don't have enough money, do we? Now the question is how will the deficit be financed and how much time is required to raise the needed funds to finance such a huge budget? (Note: O.E. = operating expenditure D.E = development expenditure)
Well above all else lets look on the bright side that this recession is not something new and as good times and bad times comes and go, so just sit tight hold back a bit and work your ass off if you are still having a job so that your productivity contributes towards the profitability of your organisation and than better times will come around again and you will stand to gain from it.

Read earlier post on the recession HERE
Posted by Unknown at 6:47 PM

The BN thinks we are as DUMB as them.. My 88 year old mother is insulted. I have to give her a BGA (brandy ginger ale) her drink during her roaring years (as still is)to calm her down.

zorro the guru,
hahaha, what did you tell your grandma that got her so hyped up. Better stop telling her horror stories of BN so that she could get better sleep.

looks like we don't have the money yet maybe BN has some magic to make more money.

BN is bankrupt long ago