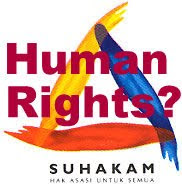 There is no credibility to the home ministry based on the facts and the records speaks for itself. The Home Minister Hisshammuddin Hussein who is the son of the third Prime Minister of Malaysia Tun Hussein Onn who eventually stayed out of the fake UMNO and had refused to joined this new "celup" UMNO party which is totally not the real UMNO but a fake masquerading as the original.
This son of Tun Hussein Onn is a far cry from his father and his grandfather Sir Onn Jaafar the founder of the real UMNO, Sir Onn Jaafar was a man of high integrity and strong principles who left UMNO because he was disgusted with the communal and racist approach of the party and he will soon be proven to be right and shows that there should be unity and unison in the approach towards governance and that politics should be based on the truth and all people of the land should be together as one and not to be segregated and divided into different groupings. This approach of segregation was manipulated by later greedy and corrupted leaders who wanted to obtain absolute powers of a dictator. Like his father Tun Hussein had high standard and of strong principles and had refused to join the fake UMNO but sad to say that such glorious line of ancestry is all being tarnish and soon ruined.
Lets get back to the present His-sham-mud-din who today states that his Ministry has claimed that there were no signs of torture, abuse, pressure or force being inflicted on the son of Raja Petra. It is difficult to agree with the Minister based on historical facts and the government's gross infringement of basic Human Rights records that was repeatedly highlighted by the  international Human Rights Institutions and witnessed by the millions of Malaysians. Malaysians are fully aware that there are long list of unresolved human rights infringement by the institutions and departments of the Home Ministries such as the thousands of deaths in custody and not even a minute 1% of the recorded cases  had been properly addressed and a accounted for.
It is common knowledge and if you were to conduct a poll or survey i am very sure that you will find at least 90% of Malaysians will tell you that the local Institutions are all controlled by this fake UMNO government and that there are no independence and separation of powers. You can conduct your investigations towards the torture of the son of Raja Petra and as you have already implied as from the Press reports that there were no human rights infringements and whatsoever you announced will always be translated to be so otherwise.Conduct an independent inquiry and investigation and we mean independent that is to say that the parties being appointed are not appointed by you or your kind, the appointment itself has to be independent as in the past all you guys do is to appoint your cronies and than say that it is independent committee or commission or what so ever you call or titled, it is all the same.
The majority of Malaysians will not trust you as you had repeatedly harass and threaten them with impunity actions, your harsh bullying and gangsterism towards the people will not be forgotten and forgiven and will go down in to history as the dark ages of Malaysia, how can Malaysians forget the attack on the elderly and young children who participated in the various demonstration and protests. The right to express and the basic freedom to peaceful expressions of protest and demonstration was brutally handled. The Internal Security Act has even up to now while it is being reviewed used to scare and threaten the common people and shows your evil intentions to keep this wanton act in order to contain and intimidate in your quest for the greed of tyranny power.
And i can't believe that the local Human Rights Commission of "Suhakam" had manage to retain the "A" status accorded by the International Human Rights Committee, Suhakam had many a time shown their reluctance to stand up to the government and had sometimes look the other way when an infringement has been reported. Suhakam had much earlier state that they will investigate the allege torture of Raja Azman under detention and had up till today not heard a peep. Suhakam had at most just made press releases to the many issues and knowingly that the controlled main stream media will at most just print a small tiny column and most of time not even carried in the main stream news. Suhakam had not stood up against this government and demand for clear and transparent accountability and for their statement to be printed and reported with adequate coverage. Suhakam are you yet another fake? another pretense of contributions as a watchdog on the basic rights of Malaysians? What have been your achievements so far and what changes or improvements have you brought about? The truth is that other than just making unheard noises you had in my observation done naught and just another "wayang kulit".
Read the Home Minister HERE
Read RPK HERE
Posted by Unknown at 4:41 AM

Thanks for speaking on all our behalfs, Hawkeye. Hishammuddin is just another time-serving, gaji-collecting dud - like all the other duds that have taken on the job of home minister over the decades. I can't recall a single home minister worth respecting!