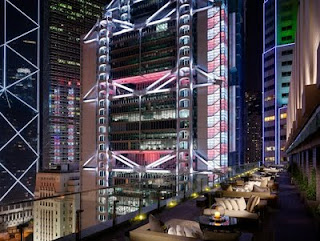 Yup! I am back in Malaysia from Hong Kong just after Najib Razak the Prime Minister who attended the 13th Asian Investment Conference hosted by Credit Suisse. This conference which is seen as a prelude to the kick off of the Hong Kong Sevens Rugby Tournament, a sporting carnival like event distinctive to Hong Kong. Credit Suisse is also one of the major sponsors of the Hong Kong Sevens tournament together with Cathay Pacific.
Will give you a run down of the conference in another posting and as for now a quick post of one of the after meeting refreshments with the investment bankers of Hong Kong in one of the impressive club right in the middle of Central Hong Kong Island in Prince's Building right on the top floor. 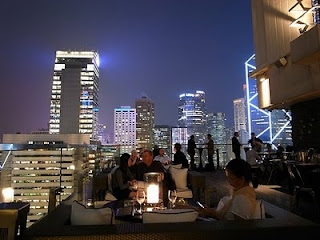 This Club Restaurant named the "Sevva" (pronounced as "Sevor") has a spectacular view of the Hong Kong with an indoor restaurant and a huge outdoor terrace and smoking is allowed (outdoor of course)! Hong Kong is now pretty strict on this non smoking laws they have here on this crowded island and smoking is ban in many places and even in outdoor parks and gardens. 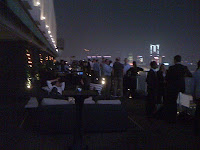 The photos you see here are all taken from the Sevva so enjoy the photos and meanwhile an extract of the conversation with some of the international Bankers here in Hong Kong at the "Sevva". 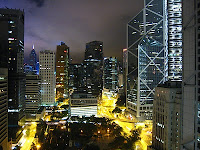 There were some chit chat on the global economic scenario and up until when one of the Malaysian who is based in HK interjectted with a question on Malaysia and anyway in Hong Kong all Malaysian are refered to as malay or "malai" in cantonese and the Hongkees called themselves just that, if you were to ask a hongkee if he were chinese he will tell you that he is a hongkee and all Malaysians are refered to a "malai" or malay, as simple as that, no confusion. 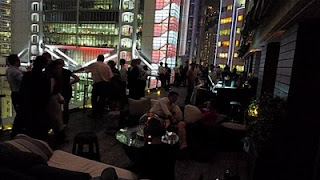 (Was enjoying a "Kronigen" and puffing a cuban at a cool 18 degree with the gentle spring breeze carassing you and a spectacular panoramic view of one of the most vibrant city at your foot.)

An extract of the conversation:
1 malai ask: "So what about having an office in KL?"
All: "Laugh Out Loud"
banker A said: "I am not going to be in charge of that office!
banker B: "We will have to recruit a priest to take charge of the office!"
banker A: "Make sure there are no kids around.."

All: "Laugh"
1malai ask: "What's wrong with KL?"
2malai said: "They dont want to go to jail for having Sex!"
All: LOL
1malai: "Its ok you can have sex there, just do it with the others not the muslims."
banker B: "Won't be able to tell after a few drinks"
2malai: "You will still go to jail with any race if you are oral."

1malai: "You mean to say cannot even talk about sex ah?"
banker A: "No you cannot stick out your tongue in the process."
All: LOL
1malai: "But that "soil leg" did it what.. i saw! (the video) and yet nothing happen to him, somemore now want to be president.. "
2malai: : "Because now his new lawyer is Lingam."
Note: 1malai has been based in HK a long time.

Email ThisBlogThis!Share to TwitterShare to FacebookShare to Pinterest
Labels: Economy, Others, Politics

Hawkeye,
Malaysia is a big joke to the outside world and is the subject of jokes in parties and dinners.
What with all the retarded ministers and umnoputras attempt to cheat and mislead the people. And all the umnoputras and ministers are multi millionaires and we all know how they made all this millions.

“… I’m sorry but I don’t want to be an Emperor – that’s not my business – I don’t want to rule or conquer anyone. I should like to help everyone if possible, Jew, gentile, black man, white(Anak-anak bangsa Malaysia). We all want to help one another, human beings are like that.
We all want to live by each other’s happiness, not by each other’s misery. We don’t want to hate and despise one another. In this world there is room for everyone and the earth is rich and can provide for everyone.
The way of life can be free and beautiful.
But we have lost the way.
Greed has poisoned men’s souls –
has barricaded the world with hate;
has goose-stepped us into misery and bloodshed.
We have developed speed but we have shut ourselves in:
machinery that gives abundance has left us in want.
Our knowledge has made us cynical,
our cleverness hard and unkind.
We think too much and feel too little:
More than machinery we need humanity;
More than cleverness we need kindness and gentleness.
Without these qualities, life will be violent and all will be lost.
The airplane and the radio have brought us closer together. The very nature of these inventions cries out for the goodness in men, cries out for universal brotherhood for the unity of us all. Even now my voice is reaching millions throughout the world, millions of despairing men, women and little children, victims of a system that makes men torture and imprison innocent people. To those who can hear me I say “Do not despair”.
The misery that is now upon us is but the passing of greed, the bitterness of men who fear the way of human progress: the hate of men will pass and dictators die and the power they took from the people , will return to the people and so long as men die [now] liberty will never perish. . .
Soldiers(Anak-anak bangsa Malaysia) – don’t give yourselves to brutes, men who despise you and enslave you – who regiment your lives, tell you what to do, what to think and what to feel, who drill you, diet you, treat you as cattle, as cannon fodder.
Don’t give yourselves to these unnatural men, machine men, with machine minds and machine hearts. You are not machines. You are not cattle. You are men. You have the love of humanity in your hearts. You don’t hate – only the unloved hate. Only the unloved and the unnatural. Soldiers(Anak-anak bangsa Malaysia) – don’t fight for slavery, fight for liberty.
In the seventeenth chapter of Saint Luke it is written
“the kingdom of God is within man ”
- not one man, nor a group of men – but in all men – in you, the people.
You the people have the power, the power to create machines, the power to create happiness. You the people have the power to make life free and beautiful, to make this life a wonderful adventure. Then in the name of democracy let’s use that power – let us all unite. Let us fight for a new world, a decent world that will give men a chance to work, that will give you the future and old age and security. By the promise of these things, brutes have risen to power, but they lie. They do not fulfil their promise, they never will. Dictators free themselves but they enslave the people. Now let us fight to fulfil that promise. Let us fight to free the world, to do away with national barriers, do away with greed, with hate and intolerance. Let us fight for a world of reason, a world where science and progress will lead to all men’s happiness.
Soldiers(Anak-anak bangsa Malaysia) – in the name of democracy, let us all unite!