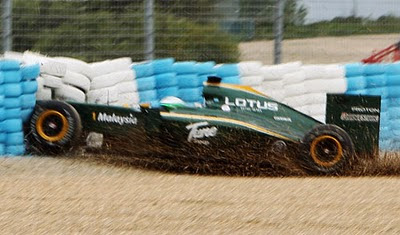 (Heikki Kovalainen crashes his Lotus into the tyre barrier, Formula One Testing, Day Two, Jerez, Spain, February 18, 2010)
The Formula One Grand Prix 2010 kicks off in Bahrain with the qualifying race on Saturday 13 March, where I had watch some of it on TV here in China. Thats right i am travelling again and will be a bit too buzy to do much writing but will try to do some postings when i can. 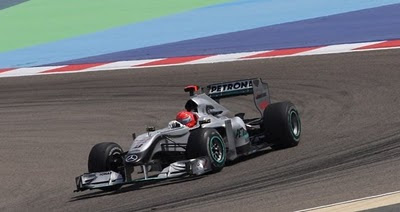 The Formula One race will kick off tomorrow on Sunday 14 March and this will be the first time ever that a country had taken up advertising in an F1 GP as with the Lotus Racing Team's car. And it is amusing to watch as the national Petroleum company of Petronas being one of the major sponsor in the Mercedez Team. 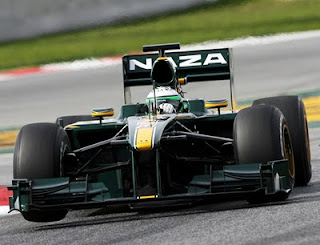 Three Malaysian companies are featured as the main sponsors with Petronas the main sponsors for the McLaren Mercedez Team, Naza Group and the Tune Group of companies for the Lotus Team. The Malaysian Lotus Team will use the race engines supplied by Cosworth who will also powered the three new teams including Lotus.
The Qualifying Race on Saturday saw the new teams taking the bottom positions and Lotus is placed at position 20 and 21 out of a total of 24. More HERE.
Ferrari last month slammed the FIA over the standard of teams that have been allowed to enter the sport.
And David Coulthard of McLaren has come out in support saying "Formula One is not a finishing school. Either you come prepared, or prepare to fail. This is the pinnacle of world motorsport."
You can watch the Race live in Malaysia today (Sunday 14 March) on Astro Star Sport at 7 PM, it should be entertaining just to watch the 1 Malaysia Team as some new teams had come under criticism from Ferari last month and you could read more HERE.
Posted by Unknown at 3:57 AM

Email ThisBlogThis!Share to TwitterShare to FacebookShare to Pinterest
Labels: Economy, Government, Others, Politics

Formula 1 and 1 Malaysia will be lag behind in terms of economic and speed compared to other countries.
I better watch TOM & Jerry.

rajraman666.We can be racial but can't be racist.
Tq.

Waste of time and money which the Malaysian government is extravagantly famous for.

This Lotus racing does not even have their own engine and have to buy it from other makers namely Cosworth.

Money that can be better spent helping the poor Malaysians.