BTN is a Brain Washing Dept 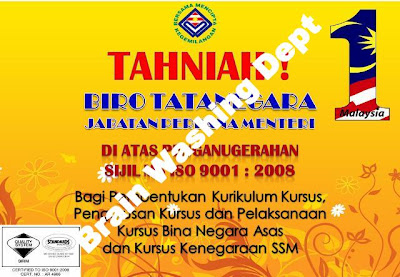 If the Prime Minister is serious about unity and his 1Malaysia program than he must first shut down this racist brain washing department.

Kudos to the Pakatan Rakyat Selangor State government in barring its civil servants and students from state-owned institutions from attending the courses described as racist and a form of political indoctrination by the UMNO led government.

It has been reported that participants of BTN courses were repeatedly told of the concept of Ketuanan Melayu, or Malay superiority. Participants are also told not to question “Malay rights” and the “social contract.”

I agree with zorro HERE and that all Pakatan states should do the same.

hi hawk,
Should be Washing... in the title.
Ppl will wash out umno come next GE.

Thanks Anon,
Koret now. yes it will be a washout.

BN can't close down its BTN! In fact, they're in the process of modifying the curriculum to include indoctrinating future BN leaders to always accept as truth whatever the Umno President says, e.g., Najib swore on the Koran that he never met "that Mongolian woman" - so it has to be true. In 2010 they plan to change the name of Biro Tata Negara to Badan Tun Najib because his reputation as a great leader would have grown so vast by then they will need to churn out new text books, documentary films, and memorable new slogans to glorify the 1Malaysia he founded.

We must do everything to either shut down BTN or change its racisr curriculum.

We do not pay taxes on our hard earned income to finance Govt sponsored racism which refers to our citizens as Jews or denigrates any race!!

Antares,
hahaha.. like that.. Badan Tun Najib.
Your visit is as always, enlightening. Thanks Bro.

donplaypuks,
shut down BTN first you have to shut down the racist BN, MIC is already out and dead, Gerakan is in dreamland, MCA is bankrupt. UMNO warlords and their factions are now shuffling for their next PM candidate.
Moo is publicly sabotaging the PM and Hiss is busy lobbying the grassroot.
Najib is in trouble and had to leave in a hurry making some kind of "arrangements." And trying to distract the public by going for the XX PM as suddenly you see lots of story of the expired old man resurfacing.
Look around my friend, and what have you seen this past week? Even some hot shot banker is out in support of the 6% economic growth?
And you have another foreign bank economist from the tiny island digging up old stories and not to mention the DPM and his allies stirring up against PM's 1Malaysia.
Get your coffee ready, Sit back and watch the wayang kulit.