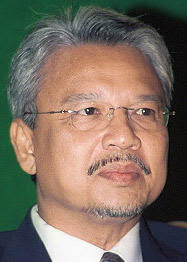 It is a rarity to see a Malaysian Minister who speaks out against it's own government's policies and this he did, Second Finance Minister, Ahmad Husni Hanadzlah (Pic) speaking at an economic outlook conference organized by the MIER (Malaysia Institute of Economic Research) today at Kuala Lumpur.  Bravo! to the Second Finance Minister for telling the "True State of the Economy"


This topic of Malaysia losing out in the economic race has been written about several times in this blog. The Malaysian government is at a loss towards the management of the economy and as highlighted in earlier writings "Budget and Corruption" is that Corruption have to be first eradicated and the Anti Corruption Commission must be made fully independent in order to fight graft, so that the real benefits of any economic plan be able to reach the common man on the ground otherwise as it is today Billions of Ringgit are siphoned off through corrupt practices of government officers and politicians.


As at todate the government has failed to effectively manage the economy and is falling way behind and losing billions of Ringgit to graft. From a mathematical viewpoint the level of graft is to be deducted from any flimsy economic growth and the true or nett effect will be a NEGATIVE growth.

Read on the AFP report of the Second Finance Minister as below:


Malaysia's economy has been stagnating for the past decade and is now trailing badly behind its neighbours, a senior minister said Tuesday, calling for "urgent" and wide-ranging reforms.

Malaysia's economy has been stagnating for the past decade and is now trailing badly behind its neighbours, a senior minister said Tuesday, calling for "urgent" and wide-ranging reforms.

Malaysia's export-dependent economy has been hit hard by the global recession, contracting by a forecast 3.0 percent this year and jeopardising its ambitions of becoming a developed nation by 2020.

Among its peers China, India, Vietnam, Indonesia, Philippines and Thailand, Malaysia's economic growth over the past three years was second-lowest, he said.

"Our economy has been stagnating in the last decade. We have lost our competitive edge to remain as the leader of the pack in many sectors of the economy. Our private investment has been steadily in decline."


"While Singapore and Korea's nominal per capita GDP grew within the last three decades by 9 and 12 times respectively, ours grew only by a factor of four."

In a withering assessment, Ahmad Husni said the services sector is underdeveloped, private investment is half the levels before the 1997-98 Asian crisis, and the manufacturing sector is suffering from lack of investment.

"The (need for) transformation is particularly urgent when we take the external environment into account," he said.

"The global environment is changing. We can no longer rely on our traditional trading partners and we need to address the competitive pressure from other emerging markets on our existing exports."

He called for sweeping measures including an emphasis on meritocracy and ensuring all Malaysians are given "equal opportunity to participate in the economy".

Malaysia has for decades practiced a system of positive discrimination for Muslim Malays who dominate the population, but critics say the policy is fuelling corruption and is hurting the nation's competitiveness.

"We must also consider the gradual dismantling of our open-ended protection of specific sectors and industries which have introduced a climate of complacency and artificial levels of supply," the minister said.

"The long-term success of the nation's economy must take precedence over the short term interests of a few protected groups."

Prime Minister Najib Razak -- who is also finance minister -- came to power in April with plans to tackle graft which is endemic in the ruling party and society at large. (As Reported by AFP)


(Plans to tackle graft? What Plan? MACC (Anti Corruption Commission) is today viewed as a political tool of UMNO and like its predecessor the "ACA" had never prosecuted any "Big Fish" and politicians till todate gets away with billions of ringgit stolen from the people!)

Sometimes, leaders hope that us the Rakyat could look at the bigger picture.

In financial forecasting, consultants or financial controllers have to also look at the bigger picture.

But what's lacking on the Rakyat's minds is financial gains (or possible ones) for politicians. And that's where all hanky panky stories appear.