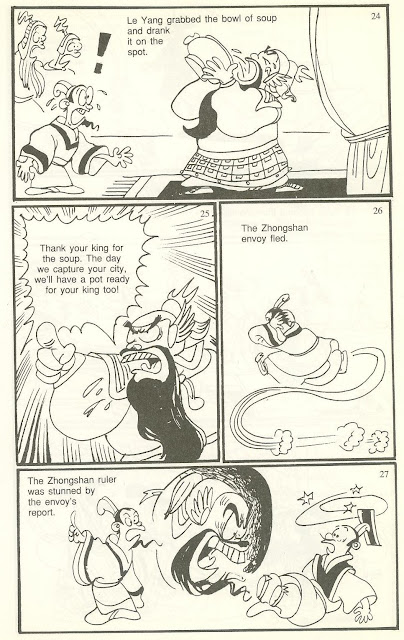 Reading RPK’s latest article in Malaysia Today of the title “Musa Hassan’s failing fishing expedition” reminds me of a story in history during the period of the Warring States, the period of chaos and upheaval leading to the founding of the Qin Dynasty of Shih Huang Ti (The First Emperor).
The state of Wei was ruled by Marquis Wen (Lord Wen) who was a wise and virtuous ruler of the state and had decided to attack the neighboring state of Zhongshan who was ruled by an immoral and corrupt tyrant.
Lord Wen of Wei appointed General Le Yang as Commander in Chief to lead the attack to rid Zhongshan of the corrupt and immoral ruler despite the knowledge that General Le Yang had a son who is an official in the state of Zhongshan.
When General Le Yang army arrived at the state of Zhongshan the ruler tied up Le Yang’s son and pushed him to the front line in warning the General to withdraw otherwise his son will be cooked and made into soup for the General.
General Le Yang instead led an all out attack on the city and the ruler had Le Yang’s son cooked and the soup was send to General Le Yang with further warning that his son’s wife and children will be next if he does not withdraw. General Le Yang was unperturbed, he took the bowl of soup and drank it on the spot and said to the envoy: “Thank your King for the soup. The day that we capture your city we will have a pot ready for him too.” The envoy panic and returned conveying the General’s message to the ruler and the frightened ruler knowing that the fall of the city is inevitable than hanged himself.
There have been many historical stories of such despicable act where the family members or the citizens were held at ransom or made as a human shield by immoral and corrupt leaders and officials and it still happen today in this modern world, will these people ever learn, and so as history repeats itself over and over, these immoral and despicable tyrants will eventually die and rot a horrible and terrible death and worse is the shame that is attached to their families for time in memorable as recorded in history.
And the funny thing here is that you can bet on it that such acts are always carried out by evil beings and corrupt and immoral person. You will never see the virtuous and honorable men behaving in such a crooked manner. In life, regrets for an evil act always come too late and in their desperation much more evil will be committed as their souls have been traded to the satanic forces of the dark.
Posted by Unknown at 8:56 PM

Email ThisBlogThis!Share to TwitterShare to FacebookShare to Pinterest
Labels: Culture, Others, Politics

To sacrifice one's offspring is the highest honour any man/woman can do for the love of his/her country. As I have pledged many a times in avrious blogs, RPK is a Towering Malaysian and a Righteous ONE. Salam.

For the thing to change, we should all considere ourselves as his sons ...

These Evil men will meet their end. They say you reap what you sow. And their sons will join their evil parents!!

"And the funny thing here is that you can bet on it that such acts are always carried out by evil beings and corrupt and immoral person."

RPK will not bow to blackmail and you bet we will have a pot ready for those who are part of the axis of evil!!

My grandfather say that he will give all the pots and he is maker of big pots.
My Raja Petra is a RIGHT MAN and a HERO of MALAYSIA!!!!!

I felt humbled and sad for Righteous RPK sacrifices. Nice story - I have to read it 2 times to correlate the people in the story-blur of me ;-(

Are we going to have PIG soup?

Whatever these evil peoples try to do about things it will lead them nowhere.

Free consultation is available! Others may have their recipe for soup musang but I possess the condiments necessary to make their recipes work. But it must be remembered that musang spare parts are aphrodisiac that maggots strive on.

Initially, they thought they could get me through my son. They beat up my son to get him to plead guilty to various criminal charges. But when the case went to court my son revealed that he had been beaten up and he changed his plea to not guilty.

So they had no choice but to allow the trial to go on and it was revealed during the trial that the allegations against my son were not quite true after all.

They then adjourned the trial and sent my son back to the Sungai Buloh Prison where they beat him up again. Then my son went berserk and they had to admit him into the psychiatric ward. Later, they transferred him to solitary confinement because he was still considered a mental case and too dangerous to be allowed to mix with the other prisoners.

HOW MUCH MORE MY GOD! MUST WE TAKE THIS EVIL!

very useful read. I would love to follow you on twitter. By the way, did you guys know that some chinese hacker had busted twitter yesterday again.
[url=http://amazon.reviewazone.com/]Diane[/url]

Pig soup must come with a halal stamp BAK TUK TEH. Musang soup also can same .

Genial dispatch and this fill someone in on helped me alot in my college assignement. Say thank you you as your information.