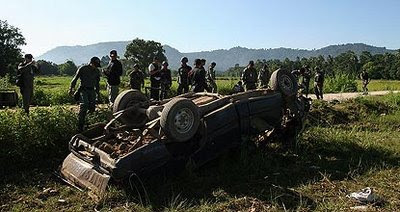 Thailand had claimed that there were between 50,000 and 100,000 people holding dual citizenship, and many militants were hiding in Malaysia after committing violence in the restive south.

Malaysia and Thailand had previously agreed to present the number of suspected people holding dual citizenship before their respective authorities and make comparisons to determine if they had such status.

THAI Prime Minister Abhisit Vejjajiva, who is making his first official visit to Malaysia since assuming power last December, said the southern issue would definitely be on the agenda with Datuk Seri Najib.

'We hope Malaysia will continue with its cooperation to solve the southern issue and help us maintain peace in the area. This includes asking for intelligence-sharing,' he said.

Is the government giving citizenship to Thai militants?