WHY IS RPK IN AUSTRALIA?

Raja Pete was granted a research fund by the WWF and the ICJ to carryout a research on the Kangaroos which is endemic to the land of Australia. He has been commissioned to accomplish this research due to his many experiences with this species which have recently been seen out of their native soil.

This endemic species seems to have evolved and turned cosmopolite and have been sighted briefly in various countries mostly in big cities. And they normally settle in cities with third world mentality, these cosmopolite specie are neoendemic (refers to species that has diverged and become isolated or one that has formed through hybridization) and isolated to the judiciary and they thrive on a diet of the greed foliage.

RPK was also seen in Jakarta, Indonesia where he was having tea with President Susilo 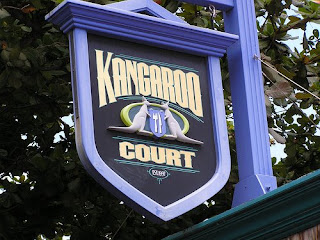 Bambang apparently trying to find out how the Indonesian successfully purges the Kangaroo out of their courts.

RPK was last seen tracking a large pack of wild kangaroos running across Woolloomooloo with Marina tailing along carrying a laptop in her arm as reported by the Finger Wharf of Australia.

Hopefully we could get access to his research findings and report further.

Email ThisBlogThis!Share to TwitterShare to FacebookShare to Pinterest
Labels: Must Read, Others

LOL! is finger wharf associated with the wharf and another popular drinking hole?