Dumb and Dumber over H1N1 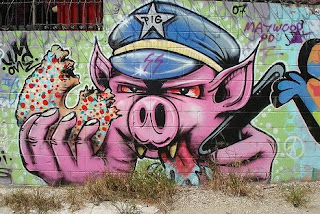 Dumb and Dumber over H1N1

Yup! Real dumb when you try to comprehend the ministers that we have and you shudder to think that we have them running the government.

First you have the Information Minister Rais Yatim coming out to tell you that to ensure that people realized the danger of the “Influenza A (H1N1)” we are now going to call it “selsema babi (swine flu)” and he added that it will be easier for radio and television announcers to read selsema babi rather than H1N1 in Bahasa.

I think the ministry should conduct an audit of all the difficult to read words and make it all easier to read for his announcers or is he implying that our announcers are not very good readers or maybe they can’t interpret or pronounce the English word. And does calling it swine flu makes it more dangerous or is he saying that pigs are dangerous?

Heck! He further added that the ministry would monitor programmes broadcasting health-related advertisements to ensure that there was no confusion as to the accuracy of the message as well as the people's understanding of swine flu.
"We should not combine health-related matters with confusing advertisements," he said.

Next comes the Tourism Minister Ng Yen Yen who says that the media should not gives too much coverage on the H1N1 virus as it is bad for tourism. At least she did not say its swine flu or is it a different virus? Oh, maybe that is the government’s strategy to use a different name to confuse the tourist.

The media should down play reporting of the Influenza A(H1N1) virus as “energetic” coverage of the pandemic flu had greatly impacted tour booking numbers to Malaysia. she said.

Ng Yen Yen went on to say that the death ratio for the H1N1 virus is low as only one death per 220. (haha only few will die so its ok no problem at all, don’t worry about it.)

“We must not be alarmists in reporting. Let’s be clear here and state the facts.” She said.

He said that even though there is an increased of infected Malaysian which had caused the ministry some pressure, it was still manageable. (Lucky that the minister gets lots of free sample of panadol so one or two tablets and presto no more pressure.)

"Of course we have contingency plans. If it spreads within a community, we will close all schools. (School holiday lah but ok still close it anyway.) We will all use our social distancing programme, namely isolation to prevent interaction or large-scale programmes within the community.

Email ThisBlogThis!Share to TwitterShare to FacebookShare to Pinterest
Labels: Government

Similarly Yen2 also said that three years ago she told the people of Bukit Koman that there should be no problem with cyanide application to gold mining. For tourism's sake, it is OK to have our own people "killed" as long as the tourism bucks flow in. Its a pity I do not know how to castrate this type of woman.

The problem with these guys are that they are shallow, really very shallow, what are their reasons for wanting to be a politician? It is all for self gratification? and they think that they are smarter than all of us, and being a politician for them is feeling mighty and grand and being like a celebrity. They don't understand the philosophy of truth and sincerity and of having humility. They really think that they are the VIP and all must look up to them and never it is in their mind of that of serving the people and in order to do that, in order to serve the people and feel for them, is about having a heart for others but to them it is about being high and mighty of being a VIP.