Sick and Tired of Crime in this Country! 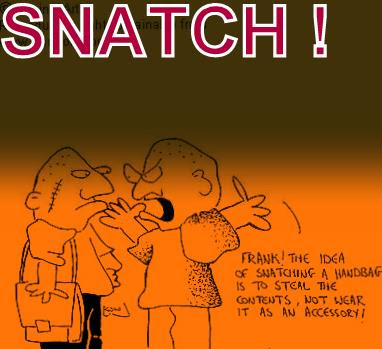 Zorro was a victim of an attempted snatch thief today.

Just a week ago Pat walk in to the wharf and complained that his wife’s handbag has been snatched in the crowded vicinity of old town PJ and the week before another friend’s old Aunty was a victim of another snatch thief and she was knocked unconscious while walking to work in the morning and had to be admitted to the hospital all bleeding on the head.

We all had friends and relatives who have been victims of crime and from the scary stories going around you can easily estimate that at least ½ of the population in the cities of Malaysia were at one time or the other been victims of crime. I myself had my apartment broken into and my project sites had countless incident of crime from snatch thieves, burglaries, break in, stolen site equipments, and one of my managers held at gun point, stole his Storm vehicle and emptied his pocket right down to murder during a robbery at one of the mini market in the township development where the proprietor of the mini mart was stab to death.

One of my business partner had his apartment completely cleaned out and another friend was victim in an upmarket condominium in Bukit Damansara right in her condo when two guys jump on her right at her doorstep and rob her apartment, she had develop such psychological fear that she now has moved to Singapore with her children but the husband had to stay as he work here in this city.

Crime is a reflection of bad governance where the government had failed to provide for the basic necessity of protection and security for its people. Our government and the police is either at a loss or not bothered to put a stop to this crime frenzy in this country. In countries of good governance you don’t hear much of snatch thieves and such incidents are very rare and I recalled a very rare incident of a snatch thief in the city of Singapore as reported in the local media and immediately the following day the thief was caught and the stolen items returned to the victim and this is the difference of a developed nation and a third world country.

The rise in crime is also an indication of a breakdown in the social structure and in line with the rise of poverty and economic hardship to the populace and a failure of the government’s focus on the overall economics to provide for basic necessities and at times especially in developing and third world countries where they overlook the contributions of the shadow economy (is also known as the underground economy and usually at a higher proportion in lesser countries) in providing stability to the social order when laws and governance are weak (usually encouraging corruption) and not with the times (outdated laws) and thus creating a psychological mentality of being deprived of the basic right for survival made worse by bad laws that oppresses the society at large.

It is funny that high crime rate are also associated with oppressive governments (oppressive governments are also associated with corruptions as an oppressive rule is devoid of love for its people) when you would expect that with harsh laws there will be lesser crimes but that is not the case every time. Which reminds me of the Confucius doctrine of ruling with virtue and not with force and that one must rule with love as a father loves his child.

Email ThisBlogThis!Share to TwitterShare to FacebookShare to Pinterest
Labels: Crime, Government, Must Read

Aiyoh...stay in apartments and condos also not safe-ar? Tot everyone was saying safer in condos since got guards and wat-nots. 1 entrance only and with grills and locks, should not be easy to break into, no?

Many people I talked to said its very safe and urge me to move from a landed property to a condo. Where else is safer, a bomb-bunker?

Anon,
There are lots of people or even guys carry handbags for the many gadgets the modern world has to offer like pda, mobile phones, and some business man carry their cheque books and zorro as i know has his smoking pipe and cigars or tobacco and maybe some condoms in his handbag.(haha)

samson,
hi again, yeah even expensive condos in upmarket location are not 100% safe and i can quote you many stories which i am sure you have some too. However it is maybe a bit safer than landed properties as the fencing, guards and cctv might act as deterrent but break ins still does happen.