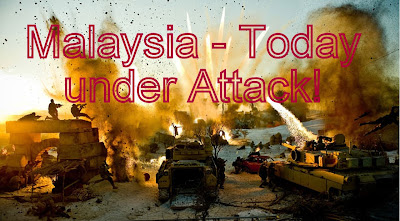 And using tactical attack known as DDOS attack. The DDOS or Distributed Denial of Service Attack in an attempt to jam up or crash your servers and to try to plant in trojans  and viruses and sucking out the life from your server. There are many variations and combination to the DDOS and are not easy to defend. It basically uses thousands of computers to attack you in a single command thereby flooding your server and eating up the bandwidth and there are many variations of methods today.

Looks like these guys are quite amateurs as the server is still standing, and are just attacking intermittently and in sporadic intervals to jam it up.Well you have to just keep trying to access the website in intervals, just try to log in every hour, and you will get in when the attack stop. I was informed the attack is in 4 hours interval.

In DDOS attack a Firewall is quite useless and will require more advanced front end equipments and software to block or filter identified IPs address and to recognize and allow regular incoming ips and genuine visitors.

This is an illegal act in the advance countries and a violation of laws and or internet laws.And depending where the servers are located and if it is located in countries with internet laws, you could basically report a criminal violation of rights.

Looks like MT will be down temporary or intermittently, don't worry, you can't completely or permanently shut down freedom of speech and the internet but one problem MT could faced are higher financial cost in protecting their servers as more manpower and expertise will be needed to design, program and monitor the system as well as new equipments and other resources.

Hi anon,
To attack my blog? you need to attack googgle. hahaha

Thanks hawkeyejack,
Very informative and the links good

Been trying to load the site from morning, afternoon and now still cant access mt.

..one problem MT could faced are higher financial cost in protecting their servers ..

hi anon 5.05pm,
Thank you and will forward your suggestion to MT.