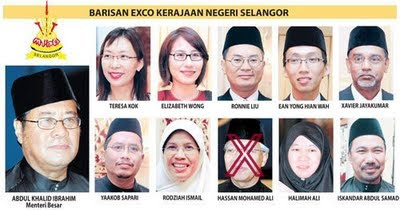 A Unified Command and Unified Action are Prerequisites for Success and this are fundamentals of  the Tao of the Military as from the Grand Duke Jiang Ziya, the Supreme Strategist.

"Unification approaches the Tao and touches on the spiritual, its employment lies in subtlety, its conspicuous manifestation lies in the strategic configuration of power, its completeness lies in the leadership." said the Duke.

The Duke advises that in administering a State (King Fisher V),  the ministers and officials must be truthful and neither irritating nor troublesome to the people.

The Duke further advises to "Elevate the worthy, and place the unworthy in inferior positions. Choose the sincere and trustworthy and to eliminate the deceptive and devious."

Pakatan Rakyat in Selangor must show a unified command and that the leadership must be able to reign in all in unity (Completeness lies in the leadership). And in that unity of command, act to quickly eliminate that who is deceptive and devious. Remember do not be dilatory, as dilatoriness overcomes respect one will be destroyed.

My big surprise is why PAS leaders are keeping so quite with this hassan ali's mutiny. Silence means consent. MB Khalid must act boldly to remove him fast, even at the expense of Selangor falling but if done right, dissolve the SA and call for fresh election before scavenger umno took control.

yes, GET RID of this trouble maker who aims to be a mb !