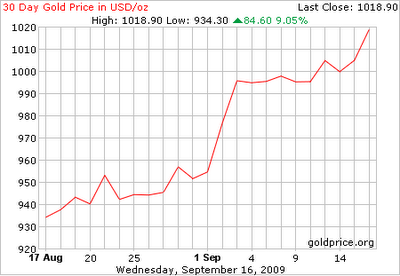 Gold Rush II
This is getting crazy and am getting dizzy trying to digest this mad gold rush, as in my previous posting of Gold Rush just last Wednesday when gold hit a year high of USD1005 an oz. has shot up to USD1023.85 yesterday as at Sept 17 before dropping back to about USD1013 today. Just look at the 30 days chart above and it has been a steep climb over just a few days.
China has been aggressively promoting Gold and encouraging its citizen to invest in gold and not forgetting that gold investment or ownership of gold bullion has long been prohibited by the communist government, and only until recently I think it was after the last financial crisis that the restriction was completely lifted just recently this year.
Could this be a safety net for the Chinese government in anticipation of an oncoming global crisis or are they trying to divert the liquidity out of the stock and real estate market of China in the hope of holding back the bubble? Another guess is that it could be a strategic move to hedge against the huge US Treasury bond that they are holding in anticipation of devaluation or the crash of the greenback. If the Yuan goes into gold and other metal than it might affect the stock market as funds are diverted out as you require fuel to sustain a bubble if there are a cutback in supply than the balloon could just fizzes out. Whichever way you look at it, it doesn’t look good on a wider perspective as gold is a non yielding investment and again it could be another speculative play from China as it is now, gold has become highly volatile and speculative.
Anyway you can bet your last dollar that the metal miners are working round the clock in churning out the gold and other metals and of course their share price will be moving up as well. The speculation now is that gold will hit USD1600 an oz. but China will bring it to USD2000.
The overview market scenario is just too speculative and doesn’t look too comforting at this very moment.

Read Gold Rush I HERE
Posted by Unknown at 7:00 AM