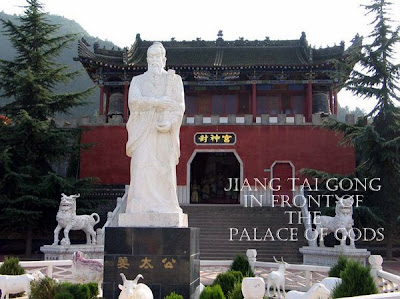 For a better grasp of the events in this story at this stage and time, which has a significant impact on the early history of China, producing many famous events, personalities and philosophies at the same time of Jiang Ziya, we will expand a bit more on the scenario and passage of this early history in order to have an overview and better understanding.

You will see here one of the most cruel tyrant in the history of China as in King Zi Shou and his concubine Daji being one of the most beautiful and influential maiden of the fame of the top four maidens in history.

King Wen of the Zhou to whom was accredited with the expansion of the science of the I Ching with the sequence of the 64 hexagram, and there was JiZi one of the princes of Shang who refused to come under the rule of Zhou than migrated with his army and later founded the early Korean states. And of course the progenitor of the Art of Strategy as in the Secret Teaching of Liu Tao from Jiang ZiYa (The Grand Duke of Zhou).

Prologue
The Xia Dynasty (2205 – 1766 BC) and the Shang Dynasty (1766 -1045 BC), in the early 19th Century, the existence of these early dynasty was being questioned by modern scholars and was reduced to mythology and being group with the earlier reign of the legendary 3 Sovereign Sage Emperors (some scholars estimated that the period of the 3 Sage Emperors could be as early 4500BC but most pointed to around 3000BC) and not until archaeological discoveries authenticated the existence of the Shang and recently the Xia dynasties. Excavated artifacts of bronze, jades and pottery sculptures with extensive written records of cosmology and divination being uncovered signify that the Shangs were an advance civilization.

It was the period of the infamous rule of the despotic King Zi Shou (also called Di Xin) of Shang and a time of sufferings for the people as this Tyrant was highly arrogant and conceited and was physically very strong, he had intellectual abilities and was eloquent, quick witted and quick tempered. His cruelty knows no bound and he will torture till death those that dare to remonstrate with him, and especially when he took in another infamous historical character and is recorded as one of the top ten maidens of historical China, the beautiful and evil Daji as a concubine, and King Zi Shou was so infatuated by her beauty that he spent all his time indulging in pleasure and merry making neglecting state matters. In folk lore Daji is featured as the evil spirit of the Thousand Year Old Vixen and till today the common phrase “Wu Lei Jing” (Spirit of the Vixen) can be heard in the quarrel and upbraiding of the chinese women folks.

King Wen of the Zhou Dynasty
King Wen of Zhou (Ji Chang) succeeded his father King Ji Li after he was incarcerated and put to death by the Shang King, Zhou was a vassal and dependent state of the greater Shang dynasty. King Wen was later also imprisoned by the same Tyrant King Shou of Shang for his loyal remonstrance. King Wen spent six to seven years in prison and was later freed through lavish bribery and gifts contributed by his family, the nobles and virtuous people of the state. King Wen was reputed to be a paragon of virtue as depicted in many folk lore and literature of later times.

During his 7 years of imprisonment King Wen directed his focus and energy towards the study of the I Ching and was credited with the permutation and sequence of the 64 hexagram and to have written the judgments attached to each hexagram of the I Ching today. As a result the I Ching is also called the “Zhou I” (or mostly spelled as “Chou I”). It was said that the divination of the destined meeting of “The Worthy One” when King Wen set out on that day on a hunting trip was: “What you will obtain will be neither dragon nor serpent, neither tiger nor bear. What you obtain will be an assistant for hegemony.”

King Wen who expanded the I Ching into the present 64 hexagram from the 8 Trigram of the “Pa Kua” and his son, the Prince of Chou who wrote on the text of the changing lines of the I Ching, both of them became a posthumous sage accredited to the I Ching some 500 years before Confucius.

Legend has it that the prophecy of “The Great Worthy” sage will appear, to help the Zhou in the battle against the Evil of King Zi Shou of the Shang dynasty and King Wen was constantly reminded by his father and as foretold by his grandfather that one day a sage will come and help him establish and flourish the Zhou state.

Notes to Part I – Jiang Ziya
Story by historians of later times during the early Han dynasty, related the story of Jiang Ziya as a senior court official of King Zi Shou of Shang, and he had feign sickness so that he could leave the court as he found the Shang ruler insufferable. He left the court and lived a life of poverty in the country side and later appeared after his wife left him and at the lowest ebb of his life at the age of 72 in the district of Zhou where the famous meeting with King Wen took place by the Wei Shui river near the city of Xian today.

Part III will continue with the famous battle of Muhye that conquered the Shang and a presentation of the works of this Supreme Master of Strategy and as many scholars believed that Sun Tzu of later years was in possession and a student of part or some of the copies of manuscript of the Tai Gong Secret Teachings as in the “Liu Tao” in his early days.


"Only A Ruler Who Shares The Benefits With The People And Cares For Them Will Enjoys Their Allegiance And Support, Whereas The Ruler Who Harms The People And Enjoys Luxury And Pleasure Is The Presage To Destruction And Failure."

And so this is the Master of all master.

Hi Chin,
He is the original and wait for part 3 when we look at this Grand Master and his strategies.