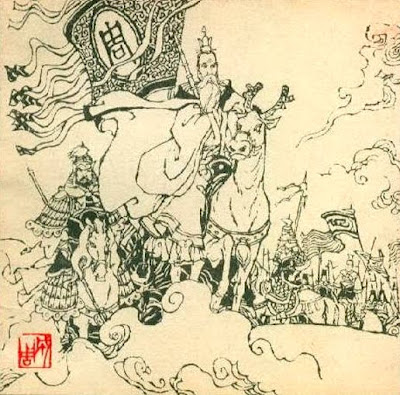 
This is an era that has created an impact on the modern world today, the philosophy and sciences of King Wen and the political thought and strategy of The Grand Duke of Zhou (Jiang Tai Kung) are all in accord with the “Tao”. Yes, the Tao is the ancient science of physics and for reference you can look to the book as written by the physicist Fritjof Capra and my first reading of it in the late 70s titled “The Tao of Physics” that compares ancient mysticism and philosophy with modern physics. We will not discuss on the sciences of the Tao and as such we shall only present the political and strategic philosophy of the Grand Duke.

(Note: For simplicity, the Tao can be referred to as “the way of nature” or just “the nature” or to act with nature to be in accord and harmony).


Following from the Part I and II, Jiang ZiYa was recruited by King Wen when they were under the rule of the despotic King Shou of the Shang dynasty, Jiang Ziya went on to assist the Zhou state to revolt against the rule of Shang and was appointed Prime Minister of Zhou. Jiang Ziya was instrumental in the establishment of the political philosophy and structure in resurrecting the Zhou state and all the strategic maneuvers towards the overthrow of the Shang dynasty.

King Wen died in 1050 BC and was succeeded by his second son King Wu (Ji Fa) who was a wise and able ruler and the first King of the Zhou dynasty. King Wu wanting to fulfill the wishes of his dead King gathered the feudal Lords in an attempt to attack the Shang but was stopped by the Duke saying that if one is to succeed than one should be patient and wait for the right opportunity which will be presented.

King Wu maintains the assistance of the Grand Duke as Prime Minister and planned the overthrow of the vastly superior army of Shang leading to the final battle of Muhye in 1046 BC. In the battle of Muhye the King of Wu assisted by the Grand Duke lead an army of 50,000 defeating the huge 700,000 men of Shang through long term strategic plan and tactical warfare.

Out of the 700,000 army of Shang, about 200,000 thousand of the slave army defected during the battle causing confusion and lost of moral amongst the ranks of Shang, and the Duke than lead the charge with just 1000 of his best trained men of Zhou right through the middle of the Shang General breaking up the already broken army in disarray caused by the defection of the slave army. Than King Wu and his allies closed in from the flanks resulting in a blood bath and fully routed the Shangs with many laying down their weapons in surrender enabling the Zhou to capture the capital city of Yin.

The King of Shang lock himself up in the palace and it was said that he set fire to his own palace and died in it and the beautiful but wicked concubine Daji was captured and executed.

And from hereon saw the end of the Shang dynasty and beginning of the Zhou dynasty with King Wu as the first sovereign and he was later succeeded by his son King Cheng who was still a minor when he ascended to the throne and he was assisted by another famous Duke of Zhou named Ji Dan who was the brother of King Wu. He was also attributed to the I Ching following from his father King Wen. He deserved special mentioned here because of his fame as the “Zhou Gong” and is known till today as the God of Dreams, (not to be mistaken from Jiang Ziya, the Tai Gong or Grand Duke) and you can still hear the Chinese telling you today, that he is going to look for the “Zhou Gong” meaning to go get some sleep.

The capital city of Yin is today known as Anyang and located north of the Henan province which is the most populated province with more than 100 million populations. Henan literary means south of the yellow river and is in the eastern central part of China.

The battle of Muhye presented the fundamental strategic maxim of wisdom in patience as in the phrase that:

Footnote: Part IV will continue with the excitement in the Wisdom of Political Thoughts and Strategy of the Grand Duke. (am half way there with Part IV and should be up in the next 2 days.)

*sorry for not posting the past few days as was caught up in work and regret for not being able to join the Guru and friends in Permatang Pasir, but the battle goes on and we shall be there in the thick of it.