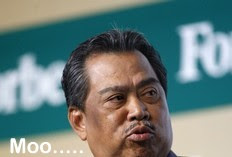 And as usual the Deputy Prime Minister who is spearheading the Permatang Pasir By Election will Win it for PAS and Pakatan Rakyat.
His selection of a defective candidate is a brilliant move, his attack on the Bar Council for the disbarment of his selected candidate is again highly intellectual.
And of course, thousands and thousands of police officers did not work in the last few elections and this time he brings in more fire power to incite fear and a show of force that he is powerful and so the people will admire him more.
And old habits die hard, they continue to bribe, the people with offerings of monies taken from the rakyat and empty promises of development and of "Anak Emas??" what the shit is that? they really think Malaysians are stoopid like cow or what?
Not forgetting, holding elections on Tuesday so that the people can be inconvenienced.

And of course he again attacks the beloved sage MB of the people of Kelantan and that will be it as he is out of league here and showed his bravery (or stupidity) by attacking the sage Tok Guru.
He Moo Moo here and Moo Moo there and the people can't understand all the din he is making and you can bet your last dollar that he is sure to WIN this election for PAS of Pakatan Rakyat.

And did he flew in by private Jet and Helicopters again this time? Won't be surprised if he did.

Pakatan just need to sit back, relax and watch the funny show. All these elections are becoming good entertainment for the nation as a respite from the economic hardship caused by these cartoons. Oh! Golly! watch out for funny tricks during polling day.
Read How Moo Won Manik Urai HERE

Email ThisBlogThis!Share to TwitterShare to FacebookShare to Pinterest
Labels: Politics, Politics and Election

Hawkeye,
This a power crazy umno politician and his people are already working for him to be the next PM.

Moo is one of the richest DPM ever. Made his money from Johor.

Yes, they win more votes this time but not the by-election ! Guess there may be another one coming up in Kedah if the election commission follows to the order of the book.