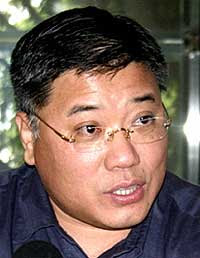 (Billionaire Politician - Tiong King Sing)
When politics and business mix, you get all kinds of shit at the expense of the rakyat's money, and here what is RM10 million when there are billions being thrown around at the Port Klang Free Zone.

However, when pressed repeatedly, Tiong conceded that the 'rumors were true'.

"Last year, Ong asked me to support him. As a new leader, he needed some funds for activities. We are politicians, we need funds to sponsor our activities.

"I was supposed to return the money to some other people. But in order to help each other, I let Ong use the money first," he said.

"He (Ong) said that he wanted to give the money to all MCA divisions. But I have no idea if he did so. This is up to MCA members to ask him.

"If he didn't give the money to the MCA divisions, then he is lying to me, I want him to return the money back," added the Sarawak Progressive Democratic Party (SPDP) treasurer.

Stating that since he regularly 'donated millions' to people, Tiong claimed that it was difficult for him to recall the dates when he gave the money to Ong.

Although there was no other MCA leader present at the meetings, the business tycoon-turned-politician said he had a friend who could be a witness.

"If Ong dares to say that he did not take the money, then ask him to come and see me, I will clearly tell him from where he took the money.

"He (Ong) had even promised to give me a receipt, but I have not received anything," he added.

Tiong, however, remained adamant that the money was not a form of corruption or that it had anything to do with the PKFZ issue.

"If I had bribed you, why didn't you (Ong) make a police report?" he asked.

Corrupt Politicians! Thieves of the Nation!

Mahathir is responsible and he cannot plead ignorance as the PKFZ is implemented during his time as PM.
Will the real truth surface as to who proposes this project and who gave the approval and allow govt money to be invested.
It is Mahathir.
An RCI is needed to find out the truth.

Wow ! Simply donates millions here and there. Can I make an appointment to see Datuk Seri ? I need funding for social projects whereby ex-convicts are given counselling and retraining to fit into society. This noble project doesn't require much but just a few millions to start with. We are planning it nationwide and maybe we can ask your humble self to be our honourable chairman, since you are so generous. So, Datuk Seri, can you grant me an appointment at your earliest convenience ???

Yes ahoo,
These politicians have plenty of money and RM10 million is just petty cash