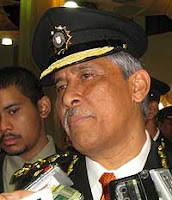 The Deputy Chief Commissioner of the Malaysian Anti Corruption Commission, Datuk Abu Kassim Mohamed has been promoted the "New Boss" in place of the "early retirement" of Datuk Seri Ahmad Said Hamdan.

So for the new boss it is only proper to first express his thanks and gratitude to the government for his promotion, he said "I thank the government for the trust they have in me." and he added "The most important thing right now is the support from the public. The MACC cannot perform at its fullest capacity without the public's support."

So the government appoints him and he is grateful for whoever (in the government) that gave him the top post. And now can he start investigating the government for graft as there have been so many reports on abuses and corruption by top government officials and politicians from the ruling elite. Will he investigate his bosses now that they have appointed him?

What public support does he need? The public will always be supportive, if he is true to the duty and performance of the job and are seriously fighting and defending the nation against the evils of corruption.

If Malaysia is serious about fighting corruption than they should emulate their immediate neighbors Singapore and now Indonesia and others who had been successful in the fighting graft.

Just look at the Indonesian's Corruption Eradication Commission known as the "KPK" which is a fully independent body free from the influence of politics and has wide ranging powers in the fight against corruption and up till today, its achievements includes senior politicians of the higher house of People's Representative Council (DPR), the chief of police, provincial governors, city mayors, a central bank governor and even the son in law of the President.

Malaysia's fight against corruption is seen as superficial and made worst by garnering the perception that it is now a political tool against the innocent and the opposition. The MACC has achieved world fame through the Teoh Beng Hock fiasco! And not forgetting the infamous joke of investigating  the Malaysian Against Cows and Cars incidents.

public support is ignored stamped.these guys abuse that trust n they expect support...mind you, people grow up ! these are all whitewash marketing glimmicks..get zaid ibrahim to lead!