China the next Dubai 1000 times or worse 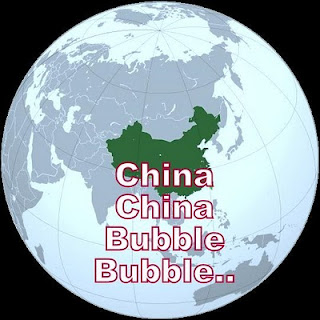 Malaysian politicians (mostly Barisan National) are always narrow and short sighted and likes to engross in bad propaganda belittling the people's mental intellect and that is what they enjoyed doing most. They think that we are fools and they goes about with their falsehood in pretense of what is ethical, fair and just. There are greater things to do but they goes around like clowns talking about ethics when they themselves are the most unethical.

We will leave this ethical story for now and to return another time as my present concern are as written here below.

Can Malaysia sustain another economic crisis and do they have a contingency plan in the event of it happening, China has become a major market for Malaysian goods and produce, and if anything were to happen to China it will definitely hamper growth and generate an economic crisis of the proportion that equates to a catastrophe.

James Chanos, the American billionaire and founder of Kynikos Associates, an investment company in the USA is renown for his intensive strategy in seeking out overvaluation in stocks and fundamental market failures. He is the "guru" of short selling and rose to fame for his research into the overvaluation of Enron Corporation that highlighted the failures of this mega corporation through accounting fraud that resulted in the "Enron Scandal" that saw the closure of Arthur Andersen, the leading accounting firm of its time.

James short sold Enron shares that saw the stock price collapse from over US$90 to US$1 in just over a few months. James is the opposite of Warren Buffet in terms of strategic approach where Warren look for fundamental underlying value and long term investments, James search for fundamental flaws and short selling.

And James have this to say in a recent exclusive with a special edition of the Halftime Report of Fast Money from CNBC:

China: Powering the Global Economy, or the Next Bubble to Burst?

In a recent report, Chanos' firm has been very pessimistic about China, and his firm has even gone as far as to speculate that China could be "Dubai times 1000, or worse."


Chanos points out a stark irony that investors who decry government involvement in US companies are bullish on the Chinese markets, despite the fact that the country's government (China) can "fine tune" the economy to their liking. He is also skeptical of the country's GDP numbers, calling them "massively inflated by under-depreciating a very, very, very shaky capital asset base."

He points out that "bubbles are best identified by credit excesses, not valuations... there is no bigger credit excess right now than China." But how do you play this?

Chanos says that although you can't short China, the short plays are in the first derivative industries: companies which support the raw and imported materials for growth (such as copper, cement and iron ore producers). He also suggests looking into short possibilities in the Hong Kong exchange.

Chanos himself is actively shorting this area, and is "looking for plays on the China investment pool, which we think will burst at some point... Demand in China is over-inflated, that is clear."

Guy Adami, an author, financial analyst and a professional investor and a member of CNBC's Fast Money agrees that the visibility in the Chinese markets is a serious issue, speculating that they could be simply hording commodities instead of using them.


Read Earlier Article on "The Chinese Bubble"
Posted by Unknown at 5:00 PM

Email ThisBlogThis!Share to TwitterShare to FacebookShare to Pinterest
Labels: Economy, Government, Others

Thanks brother for picking up this article ! Don't talked about 1000 X to that of Dubai. We have yet to know the actual depths of our (Malaysian companies & GLCs')financial exposure in Dubai and IF China is 1000 X or worse, goodness gracious, it would have push back Malaysia to the dinosaur era !

What to do then ? Hide and keep our small savings under our pillows ? Well, read that the next financial tsunami will come ashore between the first quarter of 2010. By then most of our listed companies will have their audited figures and we can see clearly those that are in RED. How many of those " good stock " are left to be seen.

You are right ahoo, M'sia is exposed to Dubai. The extent of the exposure up to now is not known.
I believe some of the Banks are also exposed.
Look at LCL the company shares just crashed as they start defaulting on loans.

Aiyo, Hawkeye, it all sounds like gobbledygook to me, all this financial lingo. All I understand is a very simple formula: money isn't real, so it's really no use "making" it because it is valid currency only within the holographic 3D Matrix - which in itself isn't real. We can make inspiring music, make a good meal, make a beautiful dining set, make a soul-stirring painting, make a fantastic amphibious flying machine that will take us wherever we wish to go on land or sea or air, make transcendental love - so many things we can do with our experience and talent that are real - that constitute REAL WEALTH. Real wealth does not diminish. It can only grow.

So how did we end up in this dreadful mess? I guess we've been saddled with a few very stupid and arrogant emperors who foolishly listened to the bad advice of their weasly and foxy "consultants" - and now threaten to use the ISA against anyone who dares point and laugh at their exposed royal privates.

Good brief and this post helped me alot in my college assignement. Thanks you on your information.