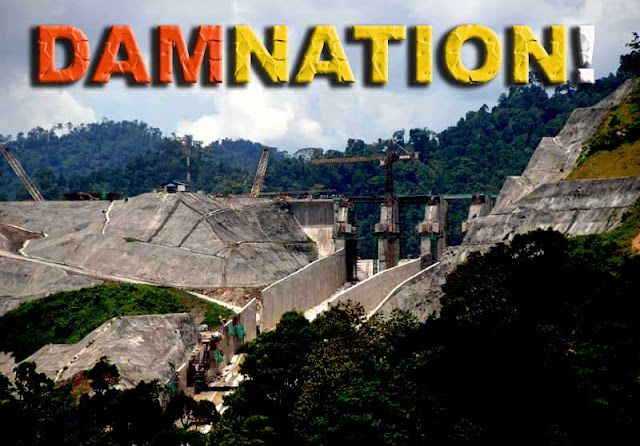 (Pic from Antares)
Transparency International has labelled the Bakun Dam Project a "MONUMENT OF CORRUPTION" and highlighted debate over whether there will be enough customers in 2011 when it becomes fully operational with a 2,400MW capacity.
All the valuable timber has already been removed from its catchment area, and the dam will begin filling up next month, taking eight months to submerge all 70,000ha.an area the size of Singapore.
Antares of Magick River has this to say " Wasn't it Mahathir who proposed the accursed Bakun Dam, even though Malaysia was producing an excess of electricity? He had this hare-brained scheme of piping the power from Sarawak to Peninsular Malaysia through a 700km undersea cable. Never mind that the dam project required the resettlement of more than 10,000 indigenous people and would result in an area of pristine rainforest the size of Singapore being inundated. Mahathir's can-do contractor crony, Ting Pek Khiing, was more than happy to clear the designated area of foliage and foist the hardwoods on the Japs.
And if that wasn't stupid enough, Mahathir also signed a secret pact in 1994 with YTL and other independent power producers (IPPs), forcing Tenaga Nasional to buy their excess electricity at an exorbitant rate. This binding contract will only expire in 2015. As a result Tenaga Nasional has had to keep increasing the household price of electricity to protect itself from bankruptcy." Read Magick River HERE.
Yet today we read that there are 12 more Dams are on the drawing board in Sarawak as reported by the Straits Times of Singapore HERE. And that is not inclusive of the other planned damming projects as announced in the recent budget by the Prime Minister Najib Razak where he said:
“A business friendly environment requires uninterrupted electricity supply to ensure smooth business operations.” says the Prime Minister Najib Razak who is also the Finance Minister."
And so, many more Billions of ringgit will be thrown in to generate more electricity and includes the "Hydro Electric Project in Ulu Jelai, Pahang and Hulu Trengganu. And Sabah will also increase electricity generation says the Prime Minister."
This Bakun Dam is estimated to have cost the nation over RM 8 billion and not inclusive of the 700 kilometres of submarine cables that will cost another RM 10 billion. (estimate).
Have we no shame whatsoever? This story is now reported all throughout the world today! Why the HELL do we need all this Electricity for? And they are even talking of NUCLEAR ENERGY!
This is real MADNESS!
Read details of the Bakun Dam Project in Wiki HERE
Watch You-Tube Video on Bakun Dam HERE (Filmed in Secrecy)
Read Malaysian Mirror report "This Government is very bad" HERE
Read the Main report by AFP HERE
Posted by Unknown at 12:34 AM

Malaysia need to generate lots and lots of energy to power up PutraJaya and all the Palaces of the UMNO elites. That is why we will need to build all these dams.