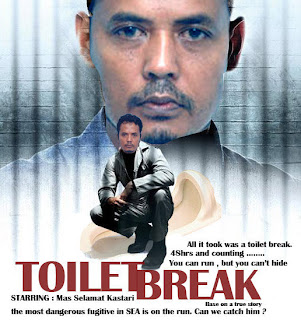 Mat Selamat the terror suspect detained under the Malaysian Internal Security Act (ISA) was today late afternoon sent back to Singapore. No reason was given by the government.

Some are saying that this is a gift to appease the Singapore government in the chase by Najib for the rich island state investments in to Malaysia.

Najib was in Singapore last week to settle the issue of the KTM land swap and a host of investments by the Singapore government was announced and confirmed especially to the Iskandar region of Johor Bahru.

The story of Mat Selamat was carried by the Associated Press just released at about noon today as below: (click read more)

Malaysia deported a Singaporean terrorist suspect Friday nearly 18 months after he was captured while on the run after staging a dramatic escape from a high-security prison in the city-state.
Mas Selamat Kastari, the alleged commander of the Singapore arm of the al-Qaida-linked Jemaah Islamiyah militant group, was released from a Malaysian prison Friday morning, said Mohamad Fuzi Harun, head of the Federal Police's counterterrorism unit, in a written statement.
"The Home Minister ... canceled the detention order against Mas Selamat," Mohamad Fuzi said without elaborating.

A statement by Singapore's Home Ministry said the former fugitive, who is of Indonesian origin, was handed over to Singaporean authorities later Friday.
It said "he has been arrested under the Singapore's Internal Security Act," which allows indefinite detention without trial.
Mas Selamat, who is in his late 40s, is accused of plotting to hijack a plane and crash it into Singapore's international airport. Jemaah Islamiyah is accused of carrying out the 2002 bombings in Bali, Indonesia, that killed 202 people.

After a year on the run, he was captured in Malaysia on April 1, 2009, and detained under the Internal Security Act.

Mas Selamat's deportation came two days after Malaysian Prime Minister Najib Razak went to Singapore for bilateral talks with Prime Minister Lee Hsien Loong. The talks focused on a land-swap deal, and there was no indication that Mas Selamat's release was imminent.
The Singapore Home Ministry statement said Mas Selamat's capture and deportation "illustrates the long-standing close cooperation between the Malaysian and Singaporean security agencies, which has served both countries well."


At the time of his escape on Feb. 27, 2008, Mas Selamat was being held in a heavily guarded jail in Singapore. He escaped by wriggling out a bathroom window in a shocking breach that severely embarrassed the city-state known for its rigorous security. His ability to remain in hiding for more than a year underscored that terrorist networks in the region remain strong.
The search for Mas Selamat initially focused on Singapore and neighboring Indonesia, where it was thought the local branch of Jemaah Islamiyah would easily provide shelter for him. But he was arrested on the outskirts of Johor Baru, the capital of the southern state of Johor state, which is separated from Singapore by a narrow strip of sea.
A father of four, Mas Selamat escaped when he was taken from his cell to a room where he was waiting for a visit from his family. He disappeared after being granted permission go to the bathroom, authorities said.
Such security breaches are virtually unheard of in tightly policed Singapore, an island nation of 4 million people.
Mas Selamat fled Singapore in December 2001 following a crackdown on Jemaah Islamiyah. He was arrested by the Indonesian police on Bintan island in January 2006 and handed over to Singapore authorities.
Note: Tonight at 7.30pm on Channel NewsAsia, with a repeat telecast at 11.30pm, a special edition of 360 where expert guests examine Malaysia's decision to deport the top terror suspect and the priorities ahead for Singapore authorities.