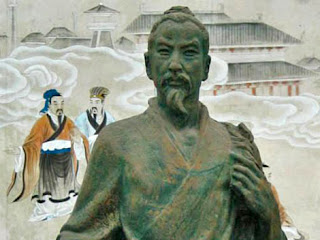 This is an attempt to educate our poiliticians on the practice and behavour of a career in politics, Malaysian politicians practices manipulative and rudimentary politics and lack an understanding of integrity and ethics. They try to employ strategem and tactics but is lacking in the knowledge and show a shallow and crude views of the philosophy of politics.
Philosophy is defined as the rational investigation of the truths and principles of being, knowledge or conduct.

This site has much earlier presented an even earlier political thinker of some 3000 years ago in the history of philosophy as in the King Fisher series.
The philosophy of the ancients long ago realizes that strategy is all encompassing and reguires the philosophy of truth and if employed without then the stategy will be one of evil and of extreme cruelty that brings hardship and suffering to the nation at large.
The foundation to a supreme strategy is the philosophy of truth and of realisation of a conciousness of the greater part as in the great of a nation. A strategy devoid of truth is a strategy of evil.
A man who choses to serve must be devoid of self and carry the heart of the people, the man should be icorruptible in poverty and righteous when wealthy, he loves the living and mourns the dead. Such is the moral standard as set out by the MoZi.
Today we would look at the sages of old of the sage Mo Tzu the founder of Mohism and regarded as the first school of teachings.


Note: The teachings of MoZi is today recorded and many chapters are still missing. The writings of the Mozi are known as "the Mozi" and i would like to caution the students of this text is that they are a compilation over a period and includes later teachings of ontology that includes the realms of the after life of spirits and ghosts which are not of the origin but a later inclusion by the disciples.
Posted by Unknown at 3:30 AM

Wow neat! This is a really great site! I am wondering if anyone else has come across something
similar in the past? Keep up the great work!

Do you want to know who the murdering lawyers of Datuk Sosilwati + 3 others + 5 more are ?

Justice 4 Victims of the Murdering Lawyers

Hawk,
Will you share your thoughts on PKR dep president contest between Azmin Ali and Zaid Ibrahim.
Many Thanks.

Genial dispatch and this enter helped me alot in my college assignement. Say thank you you for your information.