Is Malaysia a Nation of Peace? 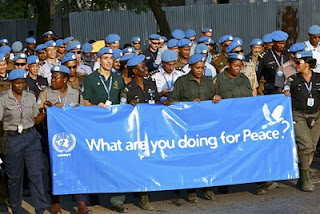 Today is the United Nation International Day of Peace observed each year on 21 September and the theme for this year of 2010 is "What are You doing for Peace?"
The UN Secreatary General, Ban Ki-moon says: "Peace doesn’t just happen – it must be nurtured, maintained and defended.

I work for peace in many different ways:
I mediate between antagonists, urging them to resolve their differences peacefully; I promote tolerance and harmonious relations among countries and peoples; I campaign to stem the tide of deadly disease; and I press for the elimination of extreme poverty, and for a natural environment that can sustain not only this generation, but those to come."
Is Malaysia a nation of Peace?


Peace is having the respect for Human Rights, the respect for basic freedom as stated in the “Universal Declaration of Human Rights”.
The introduction to the declaration of human rights states as follows:
The recognition of inherent dignity and of the equal and inalienable rights of all members of the human family is the foundation of freedom, justice and peace in the world,
Whereas disregard and contempt for human rights have resulted in barbarous acts which have outraged the conscience of mankind, and the advent of a world in which human beings shall enjoy freedom of speech and belief and freedom from fear and want has been proclaimed as the highest aspiration of the common people.
Whereas it is essential, if man is not to be compelled to have recourse, as a last resort, to rebellion against tyranny and oppression, that human rights should be protected by the rule of law.
Phil Robertson, the Deputy Director of Human Rights Watch has stated that other members of the UN General Assembly recognize that Malaysia has many serious problems on human rights. This is especially true for some of its Southeast Asia neighbours whose nationals migrate to work in Malaysia, and who have regularly had their rights violated there.
A number of European and North American governments have expressed great concern about Malaysia's continued use of arbitrary, preventive detention through the ISA, the Emergency Ordinance Act 1969, Dangerous Drugs Act 1985 and the Restricted Residency Act 1933.
Many of those countries have also expressed great disappointment that Malaysia has ignored many of the recommendations they made at the session of the Universal Periodic Review of Malaysia's record at the UN Human Rights Council in 2009.

A Nation of corrupt, thieves and criminals. Get out if you can.