Is MCA being Muted? 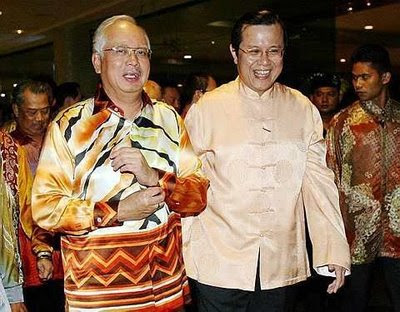 (Yes Master, heh heh heh)
The President of the Malaysian Chinese Association (MCA), Datuk Seri Ong Tee Keat says that the Barisan Nasional (BN) component parties must be independent and have the autonomy to express their views.

He said that a component party that made no demand or had no stand but simply became a "yes man" that agreed everything within the BN coalition would not earn the trust of the people.

"It will become like Ji le (chicken ribs in mandarin). It does not serve any purpose if it were kept but it would be too wasteful if it were discarded." He added.

Ong said another crucial element that would bring down a party was using external force to solve its internal affairs.

He than went on to cite Lim Guan Eng as an example and to praise his Federal Territories MCA members for their loyalty even after losing all its Parliamentary seat in the last election.

Is the MCA President expressing his own frustration for not being allowed to speak up? to be able to express their (MCA) or his views in public? as we have heard, thus confirming the rumour and our suspicion, and he than pretended to cite Lim Guan Eng and Pakatan Rakyat in substitution or as a diversion, as he might be afraid that his political Masters might reprimand him for making a direct statement against BN.

There is an old proverb that says that "to follow under pretense is a greater torture than to stand up against into the face of death". It seems that there is a tremendous self conflict in this man, for it might be that he so perceived that he had to remain and maintain this status quo, so as to contain the evil, but he is so wrong as he is only adding greater strength to the growth of evil.

Another interesting and an important statement which he said was that of "using external force to solve internal affairs", are you able to comprehend this? and what do you think he meant?

Read the Full Report HERE.
Related Story HERE.
Posted by Unknown at 12:50 AM

Email ThisBlogThis!Share to TwitterShare to FacebookShare to Pinterest
Labels: Politics

They promised the family of TBH to find out the truth and now they are all quiet.

With a monicker like that, I'm afraid he's doomed. If he doesn't speak up for MCA and allows UMNo to plot this Triads and DAP nonsense and trying to shift blame for TBH's death to them, MCA and Ong are History!

I think he's thinking of leaving BN all the time.

hi guys,
He can leave but MCA will stay as they are not united and all the other power crazy members will be clamouring to umno.