Masters of the Evil - MACC 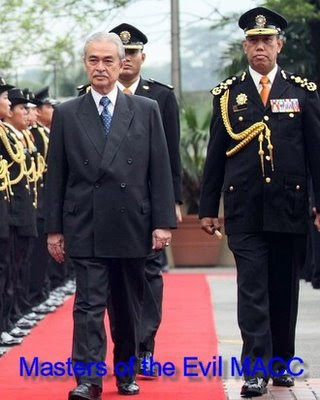 The creator PM Abdullah Badawi & MACC chairman Ahmad Said
Is the Malaysia Anti Corruption Commission (MACC) reduced to just a political tool of umno? They have done nothing towards the credibility of the institution right from the beginning the chairman Ahmad Said Hamdan came into the position badly tainted.
Ahmad Said, the chairman of Malaysian Anti-Corruption Commission, MACC, when will you explain why your son, Ahmad Shauqi, the MAS co-pilot who was convicted for pedophile in Australia last year, did not face any disciplinary action from his employer MAS? And can you explain why the local police did not investigate him as it should have done? What role did you play to save your son? Isn't that an abuse of power?

After the case of the Menteri Besar of Selangor, the MACC has jumped into the Perak political crisis when it has no business to get involved. Whatever decision made by the Perak Speaker V. Sivakumar has nothing to do with MACC and you are making a fool out of yourself in your eagerness to please your political master. Don’t you know that the Speaker enjoys immunity while carrying out his official duty?
The day MACC was inaugurated, it was pronounced “dead on arrival” and the acronym has morphed into Malaysian Agency for Cows and Cars or Malaysian Anti-Cows and Car. Oh Ahmad Said Hamdan, what have you done to MACC? You are a shame to your family and the institution and country.
The position of the chairman of MACC has been compromised and the rotten head of MACC should be sacked so that he will not even entitle to his pension. Read More HERE.
Today will be the last straw! This MACC and the people running it, the chairman Ahmad Said Hamdan is out to pleased his new political master as he was appointed by the sleepy head idiot of a Prime Minister who even after he has resigned has rooted in all the rot in this country, and it is one of the greatest regret of my life as i voted for him and even has known him as a personal friend and never have i expected him to have brought so much rot and evil to this nation of ours, he has aggravated the stinking rot. He is the creator of this evil MACC, till death shall he be cursed!
They have been harassing the innocent and closed their eyes on real corruption and this is the greatest evil on our land today and i call on all the good people of this nation to rise up to rid this evil master of the MACC.
PM Najib if you are sincere in serving the nation , we the people now call on you to reform this MACC initiated by your predecessor, the sleepy head PM and show us that you are serious and truthful in wanting to reform the nation if not this shall be a black mark to your PMship and will lead to your downfall.
No excuses and stories wanted anymore, we dont want to hear any more bullshit from the MACC, chairman and his goon Mohd Shukri you have already proven and shown us that you are nothing but evil in all that you have done, can you just resigned and disappear from our sight.
This MACC is investigating all the Selangor Pakatan Rakyat's Rep and MPs and expect us to believe that all the Barisan National reps and MPs are all angels, the people are not fools and stupid like you idiotic evil doers. Malaysiakini has a report on MACC investigating all Selangor Pakatan reps; Read HERE.
There are blatant corruption committed by the Barisan National MPs and reps and you investigate and harass the good people, your method of investigation like calling them in for investigation and detaining them in your office for the whole day and interrogating them from 5pm to 3.45am is a form of evil torture as though like this people are hard criminals. Read HERE
This evil master shall be cursed to the deepest level of hell and he will go down in history as the most corrupt of the corrupt and an insult and shame to the country and people.
Teoh Beng Hock shall not die in vain and his death will at least expose the evil doers and their downfall.
RESIGN NOW FOR YOUR REDEMPTION FROM HELL!
Posted by Unknown at 2:11 AM

Email ThisBlogThis!Share to TwitterShare to FacebookShare to Pinterest
Labels: Corruption, ISA and Human Rights, Must Read

They anti corruption is the most corrupted. Sent hem to HELL

Hawkeye, do you really think that Najib is "sincere in serving the nation"? He is the man who had commandos blow up a Mongolian model with C4.

Hawkeye, do you really think that Najib is "sincere in serving the nation"? He is the man who had commandos blow up a Mongolian model with C4.

hi Crankster,
It is not what i think, it is what i hope and i hope that Najib realize that if he could at the least brings about some change and respect for the citizens of this country he might have a fighting chance come the next election.
And any change for now hopefully will stop all this harassment and oppression of Malaysians.
Just hoping.. thats all and if nothing gets done than he will have to face the music later. Nobody can escape the law of nature.

And I suspect that Najib is probably behind this because UMNO would have pressured MACC to come up with dirt on DAP.

The problem is, they couldn't find any.

And I don't think it's about whether Najib has a fighting chance to stay in power or not. I know I didn't elect him.

If we had a fair and just system, I wouldn't be seeing the likes of him at all.

haha, i can understand your view on this, but as the PM now he doesn't need to give any instruction as these goons will be trying to please him to the hilt.
At this point we just want something done and the people should come out and show them we mean business and will not tolerate any more.
So are you stepping up to be counted, if so for a start see you tomorrow at Kelana Jaya.
People should come together to voice our disgust with what is happening to our country. It is our country they are screwing up so what are you going to do about it?

I have no intention of remaining silent. We need to come out in full force.

The people must see the pattern.

A ceaseless, raging life and death struggle.
People, wake up!!!

Change we must and Change we will !