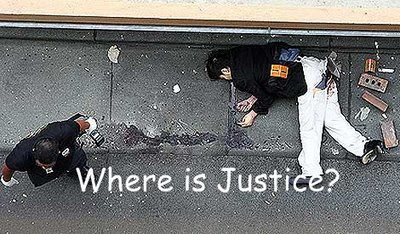 What is the PM afraid of and what have he got to hide by not calling for a full Royal Commission of Enquiry to investigate the death of Teoh Beng Hock?
Instead they called for a Royal Commission to study the Malaysian Anti Corruption Commission's (MACC) standard operating procedure in questioning witnesses and other duties? This looks like a joke and a deception into deceiving the people and is full of pretense.
And at the same time he announced that an Inquest is called to determine the cause of death of Teoh Beng Hock. (An inquest is led by only one appointed magistrate)
It should have been the reverse and the Royal Commission to investigate the death and the Inquest to study the MACC. (The old one is flip flop and this new one is flip flap.)
Are the PM and the cabinet afraid as they are involved and using the MACC? If not and they have nothing to hide than a full Royal Commission of Enquiry should be established.
Must Read the Bar Council Press Release HERE.
Posted by Unknown at 3:29 AM

No justice for Malaysia. All the judges are umno judges.

They are afraid the truth will come out!

Hi donplaypuks,
It looks that way isn't it?

Pleasee highlight this to all your friends to blog about:

The very 1st invoice at T4TBH http://www.t4tbh.blogspot.com/ is a fake.

T4TBH - fake of the century!! Muahaha!

Yes donplaypuks,
They are only able to get stoopid fellas to fake it for them, hahaha the fakers can't even do simple maths. Don't worry about them as they are digging their own grave the ppl can see through their lies.