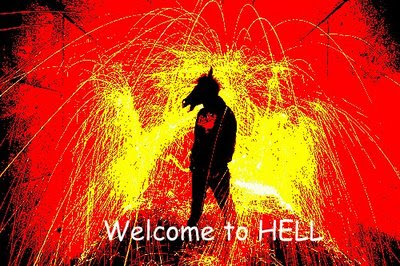 (The horse-faced gaoler awaits)
There is Hell and are simply describe as here;

Hell is Hell and Heaven is Heaven and there are not such as a Christian Hell or a Muslim Hell or a Chinese Hell or Indian Hell or of any other race or religion. As they say all roads leads to Rome and all religion will lead to the same destination if practiced in good faith and in truth.
The disbelievers as describe in most religious texts is best defined as those who pretend to be of that faith or are transgressors who are not believers but pretend to be believers and does not adhere to the basic teachings. Worst are those that make use of the religion so as to gain prominence and rise up as leaders through treacherous means and than oppresses their fellow humans and to create enmity and division amongst the people so that he or his type will be able to capitalize and gain or hold on to power and position as the rest of the people distrust and fight over each other.
The teachings of most or all religion are simple and not complex as in simplicity we will find truth and our paradise, there need not be too much of unnecessary interpretation and most time leading to misinterpretation and confusion so much so that they are in greater division just as you can see today there spawns into many different sect of the same religion all professing to teach the true faith so much so that still greater enmity, hostility and hate are being generated alone within the same type of religion.
The most evil of all are that political differences and conflicts are distorted into religion and resulting in a diversion of the faith that justifies the killing of their fellow brothers and yet in all the religious text and teaching had admonishes this act as an evil act and are condemned upon.
The disbelievers and transgressor are defined as those that pretend to believe, these are the fake and impersonators that mislead the people as being pretenders they are like actors and over time with experience they become academy award winners in acting and sad to say the pretenders rise to prominence and are devious as they had greater motivation through their greed and lust for power, fame and wealth.
All faith and religion are actually simple and easy to follow as God or Allah (or any other name in any other language) will not make it difficult to understand it is just that the evil comes on to bamboozle and make it complicated and confusing so that you are mislead and instead walk the path that leads to Hell. God will not make complex laws and rules so as to restrict its people and judges only upon the finality of one life time. Laws and rules are made by man.
God or Allah has made it so simple and nothing else and he ask naught from us but to take care of the earth as made for so that our brothers and sisters can all share and live from it and that we love and care for all and to preserve and conserve for all that is there. God loves his people and will not complicate and confuse them. It is just that Simple!
The Complication Comes Forth From The Devil!

I agree that all religion leads to the same path and there is one heaven and one hell for all and only one GOD will be the judge.

Hawkeye,
This is an interesting story and thank you for sharing.

Today is also the 7th day of TBH death and his soul will return to earth and it coinside with the total eclipse of the sun, Is this an omen and can you interpret it.

“Well-placed sources and officials close to the MACC said Teoh was “manhandled and threatened” by investigators during a 10-hour interrogation as part of a political conspiracy to bring down opposition leaders, led by Anwar Ibrahim, and to implicate them for alleged misuse of funds.

When he refused to do so, the officers dragged him to a window on the 14-story building and threatened to throw him out,”said the source who was not authorized to speak to media.”

Well, this piece from Malaysian Mirror is interesting. Check it out at:

We are all of one Race, the Human Race.
That is all that really matters.

Thanks for the info. This is similar to RPKs story,