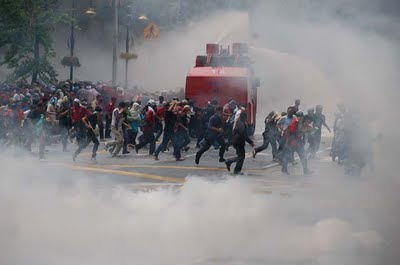 How to estimate the number of people in a crowd?

It is with annoyance that the numbers of protesters being reported especially by the main stream media are completely out and sometimes atrociously discounted by 90%, like the Anti-ISA protest of last Saturday. But it is with greater frustrations to see the independent media or Internet media like Malaysiakini getting it all completely wrong and it has been such on numerous occasions of which we have noted.
The foreign press will somehow always rely on figures pick up from the local media including numbers reported by Malaysiakini depending on their preferences. And it was generally reported that the crowd size was about 15,000 by Malaysiakini and the foreign press and supposedly they had followed the numbers as reported by Mkini and they are wrong again.
The approach towards crowd estimation is to be able to estimate the area of the site where the crowd are located.
First lets get some dimension correct which will be the guiding principle:
So if you could get the width and the length than you will be able to estimate the total area. And than the density of the crowd will require some judgement with the guide as below and from experience it will become easier.
In a sardined pack stationary crowd, it is about 2 square feet per person which is 2 feet x 1 feet, and a sardined pack crowd when moving or marching will be at 4 square feet (2x2 feet) and than a loosely pack crowd in an open space like standing and sitting in the field will be about 9 square feet per person (3x3 feet). And if it is a crowd spread over in a big area, than you will have to cut the ground into sections of quarters, thirds and so on.

With wide angled photographs as a guide, you will be able to generate the closest estimate and of course a wide aerial view from a high point will be the best.

And so with these guide as stated, we will now attempt to estimate the numbers with the following photos as below: 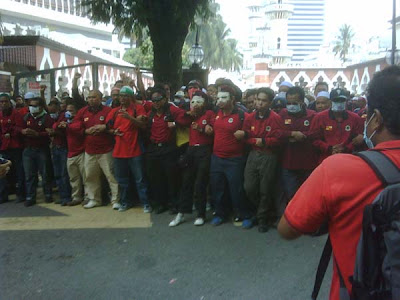 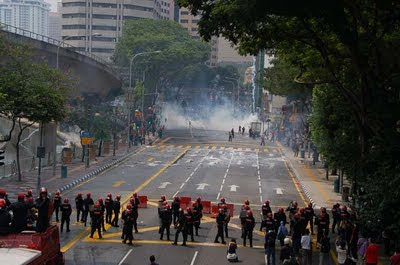 Estimate the width of this site above with 4 car lanes at 12 ft per lane x 4 lane = 48 ft than add the bus lane of 15 ft = (48 + 15) 63 ft and add the pedestrian walk on the left of 15 ft and another 20 ft on the right (on the right pedestrian walk is actually much wider) so total width 63 ft +15 ft + 20 ft = total width of 98 ft. Now lets check the entire visible length in the photo as above against the photo below. (Note the crowd has filled up the entire area and was confirmed by people in the location) 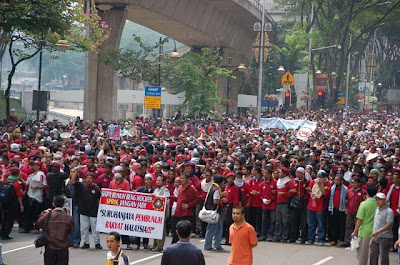 The small shorter decorative lamp is about 50 feet apart and the first one on the left is the first 50 feet of the front end crowd and there should be 12 visible decorative lamps so 12 x 50 = 600 ft plus the first 50 ft = 650 ft than check the photo above if you zoom up close you will see another 3 tall lamp post after the decorative lamps and is on the right side of the first photo which will give you 3 x 200 ft = 600 ft + 650 ft = total visible distance from end to end of 1250 feet. And so the total crowd estimate in the above two photo will be at 98 ft width x 1250 ft length = 122,500 square feet over the estimate density of say 4 square feet per person will gives you a total crowd estimate of 30,625. just for this location in this photo. 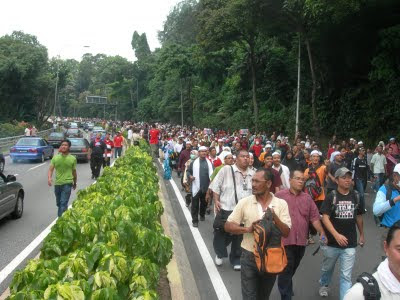 This photo above to be analyse with the photo below, is the crowd from Masjid Neagara (National Mosque) and marching on one side of the road of two lanes and so the width is at 24 ft and plus 2 feet of buffer as above outside the white line and 3 feet of side table on the right side of the road and so total width is at 29 ft. 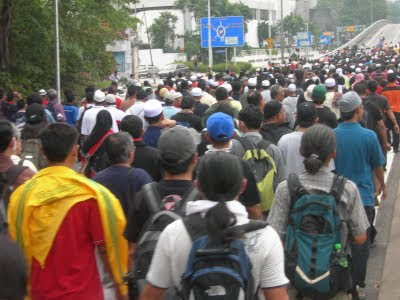 You should be able to see 10 lamp post from above two photos giving you an estimate of 29ft x 2200 ft (2200ft is about 700 metres) = 63,800 square feet over 4 square foot per person will give you a crowd estimate of 15,950 people. In estimating you have to give and take and you can see that there are at the same time quite a bit of people on the other side of the road. which is out of the boundary of our calculation.

And they were supposed to join the crowd marching to Sogo but was stop in their track right here in front of the Royal Selangor Club by the Federal Reserve Unit (FRU) and the Police, with this dastardly act of relentless bombardment of tear gas and water canon on the peaceful protesters including of young women and young children and the old who had came forth to tell the government to abolish the inhuman act of the ISA and were given a taste of the inhumanity from this government. 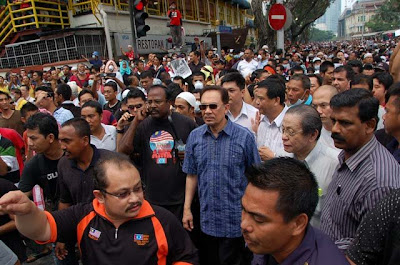 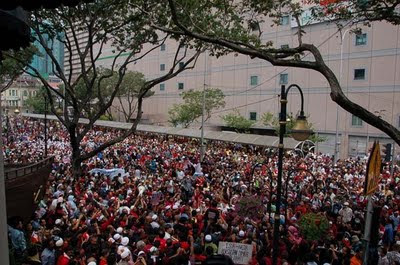 Look at this two photo above in the same location and position with Sogo shopping mall right at the back. And Anwar and Kit Siang walking and the Sogo is on the right. The length from analysis of the photo is about 1500 ft and the width is easily a 120 ft as for the huge side walk on both sides of the road. And from this two photo the crowd just in and around the locality are estimated at 45,000 strong.

And we were informed that there was another crowd of at least 15,000 from the Masjid Jamek area. So just from these photos provided we would be able to see that the total that came out for the Anti-ISA march is more than 100,000 strong.

We are wondering why this Malaysiakini is getting their numbers completely out nowadays, we had noticed their figures as reported and is heavily discounted but not as much as the government controlled media.

Hawkeye,
Thank you for this new info. There are the location from Pasa Seni another 20000 demonstrators.

As usual, they will never want to tell the truth. Malaysiakini is long ago become part of umno bn because most probably they were warned and bought over with some big cash offer.

So my report is off target, I put it as between 5k to 8k. Need to update my blog.

This is very smart!

Your explanantion clearly shows that the number of protestors at the anti-ISA rally must have been greater than the number of 10k to 20k reported in various media.

One suggestion though. To adequately satisfy any potential doubting Thomases that there is no double-counting involved in that estimated crowd number, it might help to confirm the times the photographs (being used for the estimate) were actually taken to prove that it would be impossible for the same protestor to be included in more than one crowd.

Hi anna brella,
There are no double count here as the photos are of distinct and at different location.

Most of the photos are taken in pairs as the one with the police with the roads deserted is just to show the dimension.

And the pair of photos on the roads is to show two ends of the visible crowds. and distance and this group never got to join the other group as it they were lock out.

Sounds more like it. This was even bigger than Bersih.

Hi Rahman,
This post act as a guide and my overview of the whole crowd from feedback of those who are there.

I have not taken into account of the Masjed Jamek crowd.
Just from the National Mosque or Jalan Kuching where i was there and the Sogo area where my friends were at.
The Jln Kuching crowd were hem in until late as we were attack a few times by the FRU water canon and tear gas.
In conclusion this method will help you in the assessment of the size of a crowd in future.

I imagine that 100,000 is an accurate estimate of the number of people who intended to participate in the march. However, given that a lot of people were prevented from reaching the city centre (roadblocks, etc.). I believe 100,000 to be an over-estimate of those who actually marched. anna brella is absolutely correct that it is crucial to have the time and location of all the photographs in order for an accurate estimate to be calculated. The ones with the best information were the police in the helicopters (and those in tall buildings). What is needed is a composite of aerial photos to have a more accurate estimate.

Hi Teck Wyn,
Agreed. That would be the perfect scenario. Of course the police with their helis will have the most accurate estimate.

"The length or space between two lamp post of the road are about 200 feet apart."

How sure are you about this? I calculated roughly using my car's odometer that the distance between 3 lamp post is 100metres so 200 feet between 2 lamppost can't be possible. I am not certain of this though and may have my facts incorrect but maybe you could verify this?

Hi Wen Shan,
haha, you gotta measure it proper if you want.. not with the car's odometer for short distance. Car odometer is meant for long distance.

Ok technically lighting distance is dependent upon a few factors like first the height of pole and the luminance of the type of lighting used and the width of the road but if you are in the housing area, it will be about one chain between lights and thats about 100 feet. And the the lights are one on each side of the road ie left and right (usually).

But generally on the highway with dual carriageway it will be about 2 chain apart if the light is laid on the side of the road. and each side of the lampost will be overlapping the other side.

And if the lampost is on the central median of the road with 2 overhanging lamps with one on the left and the other on the right and is dependent on the height of the pole but as a generality you can safely used 200 feet (2 chains) on a straight row without counting the other side.

They will never lay the lamp pole with the exact distance as there are other considerations as underground manhole and cables and etc. and sometime curi a little bit here and there, haha.

But if you are in a housing area or shop area than your estimate should be based on the width of the house or the shop.

Haha, sometimes the answers can be a separate article in itself.

Feel free to ask and i will answer with the best of my knowledge when i get the time.

Wen Shan,
Sometimes when the lampost on the central median of the road it can be a little bit shorter by maybe 6 to 8 meters.

My estimate of the photos should be correct as the lamps are on one side of the road.

Good explanation. Satisfactory. I roughly measured the lamp post along Loke Yew road. Maybe when I have the luxury of time I'll go do a proper measurement. Thanks for the reply.