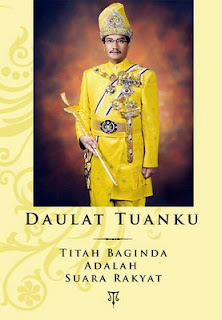 Lets be judicious about our judiciary!

Extend your fervent support for the petition to the King as initiated by Haris of The People's Parliament!

Don't let them have it their way in planting their cronies everywhere, you now have an oppurtunity to express your views through the petition to the Yang Di Pertuan Agong on the Appointment of the Chief Justice.

At pages 174 and 175 of its report presented to His Majesty on 9th May, 2008, the Royal Commission of Inquiry mandated to look into the matter of the VK Lingam video, in recommending the formation of a Judicial Appointments Commission, observed as follows:
‘…there is cause for concern about how judges in the upper echelons of the judiciary were appointed and the selection criteria employed. More specifically the evidence has disclosed inherent flaws and weaknesses regarding the process of appointment and promotion of High Court judges as well as the Chief Judge Malaya, President Court of Appeal and the Chief Justice of the Federal Court…Having heard the evidence presented to the Commission in relation to the video clip it would seem clear that the appointment and promotion of judges of the higher judiciary is open to interference and manipulation by the Executive and other extrinsic forces including private citizens…the inherent weaknesses in the process of appointment of judges and its vulnerability to interference and manipulation could result in extreme damage to the independence of the judiciary in particular and to the country in general’.

We, the rakyat, are now gravely disappointed with recent media reports that several Cabinet ministers, notably from UMNO, have rejected the proposal by the Law Minister for the establishment of the Judicial Appointments Commission and that the Law Minister had recently confirmed that there would now not be sufficient time during the present sitting of Parliament to table a bill for the purposes of establishing the Judicial Appointments Commission.

LETS GET HOT ABOUT THIS CAMPAIGN AND SHOW THEM THAT WE THE RAKYAT ARE BURNING HOT ABOUT RESTORING JUSTICE TO THE JUDICIARY!!!!!