Allegation of payment made to family member of Tun Dr. Mahathir 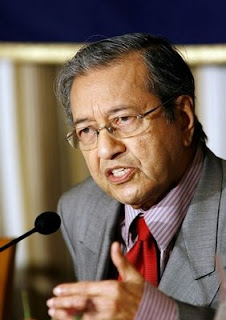 In Indonesia, a joint-venture into a pay-TV business has turned hostile. Allegations of embezzlement and fraud, including charges that unauthorised payments were made to an unnamed family member of former Malaysian premier Mahathir Mohamad, have been levelled.
A grand alliance between two of South-east Asia's wealthiest tycoons, Malaysian T. Ananda Krishnan and Indonesian James Riady, has collapsed into an acrimonious face-off that could lock their businesses in a bitter legal battle.
Relations worsened to the point that at least three employees of Mr Ananda's business units in Jakarta had to flee Indonesia for fear of arrest by the police.
Reporting from Singapore. Read Full Report HERE.
Posted by Unknown at 3:50 PM

This is really interesting. It will definately be very very hostile.

Just a matter of time more and more expose will be out.
The truth will always prevail!