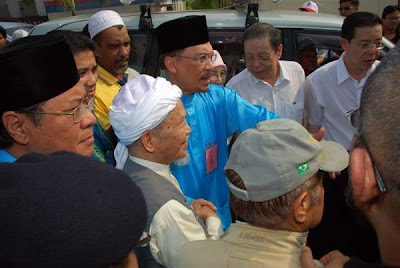 
Back from Permatang Pauh and still in exhiliration although that we only had about 3 hours of sleep. What a day! What an experience this has been and Yes this has all the makings of a historical event.

First some correction from the earlier posting on the electoral votes and was informed that the new electoral roll has approx. 58500 voters.

And on the turnout of supporters for Anwar Ibrahim and after much estimation and deliberation with our fellows bloggers and from both the BN and Pakatan sources, my final guess for the Pakatan crowd is at about 70000 and BN crowd at 3000.

The Pakatan supporters are all over and as the padang was jammed pack of people, tens of thousands were standing and sitting on the road and even as the afternoon sun approaches, the crowd did not budge as they wait patiently in support and anticipation of the promises of hope and reformation that their new leader can bring to them.
And as the massive crowd disperses at about 12.30 pm there was a sudden Momentus Heavy Shower of Blessings that made the event all the more memorable as we were all totally drenched.

There were various press report on the number of supporters and ah' mainstream media was all silent about the estimated numbers but the foreign press has numbers ranging from "tens of thousands" from the associated press and 30000 from channel news asia. 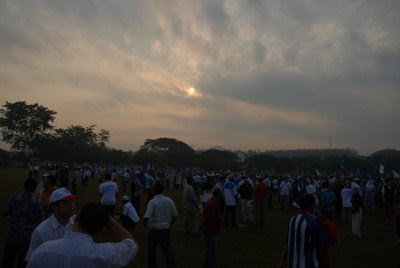 The pakatan supporters gathered as early as before the sun rises and at about 7.15am we were informed that the traffic jam has started and immediately began our journey to the nomination centre. 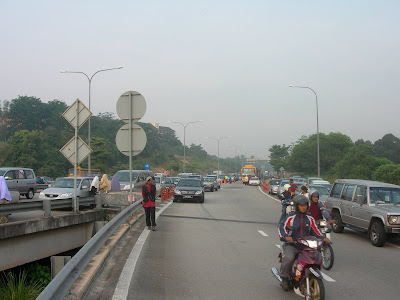 And true enough we were caught in the traffic crawl and cars were alredy parked all along the highway and had double and triple park on the expressway and we did the same triple parked and had to take a few(3-4) km walk to the centre. 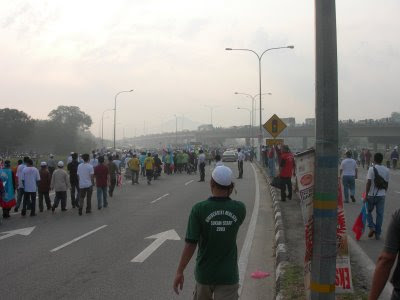 And we thought we were early as nomination starts only after 9 am and it was now just before 8am and the supporters were already streaming in. 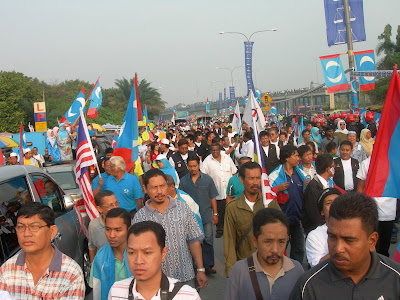 And as we got off the highway into the the main trunk road the supporters was like streams converging into a river. 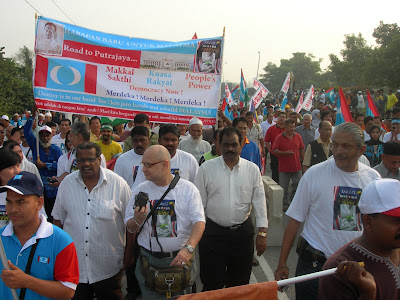 As we flowed along the streams of people turns into a gushing river! Hmm.. some of these supporters looks quite familiar. 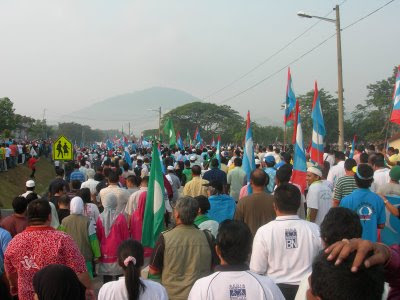 Its a tidal wave of Pakatan Rakyat's supporters everywhere and we are being push along this wave and you had to be careful of stepping into the guy in front. 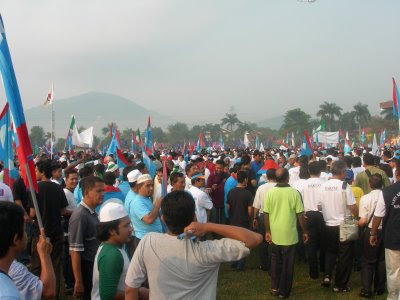 Sea of Pakatan supporters everywhere you turn and finally you be able to see some BN flags at the background. 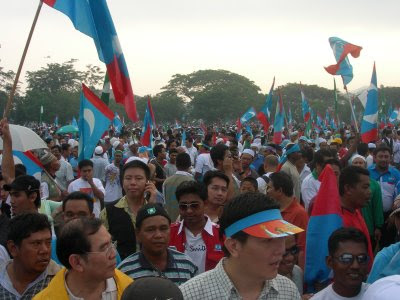 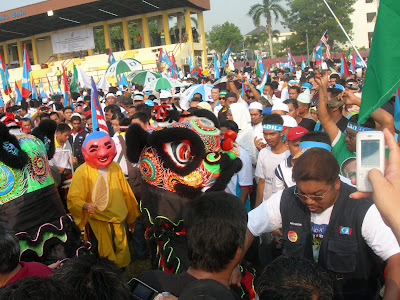 The Astaka Waja at the background and the nomination hall. There were lion dance and the hindraf drummers moving around. 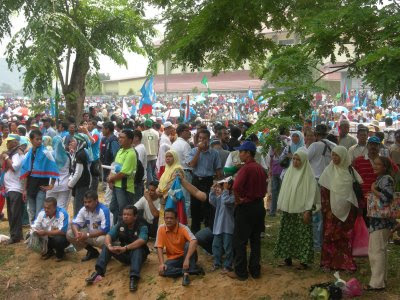 AView from the padang towards the road leading in. The padang could not accomodate everyone as it was pack jam with the Pakatan supporters. 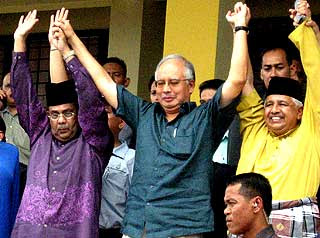 After a long long wait the nomination were accepted but some faces don't seem too happy and the Pakatan crowd were chanting "Altantuya! Altantuya!" 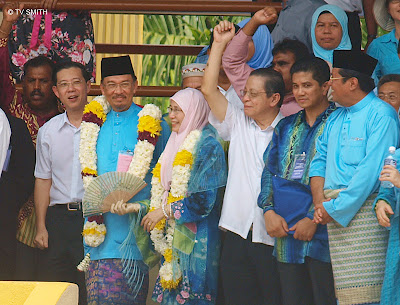 1. Voters of Permatang Pauh will vote come 26 August 2008. Who to vote for and What to vote for? (Man of Honour in Nostradamus Quatrains on Wag the Dog?)

2. 50 Questions to test your Conscience at Jeyklls and Hydes in Malaysia – Are You?

that is Raja Petra.

yup that was the Raja Petra and Haris of People's Parliament on the extreme Right of the photo.

This is one sided. you people only show the opposition photo. What about BN pictures of the supporters.

Wish I was there bro,

anon,
It does look that way but in our walk to the nomination centre, we did not see a single BN supporter.

There are some photos from Susan Loone here:
http://sloone.wordpress.com/2008/08/16/i-was-at-p44-mother-of-all-elections-with-pixs/ and you will see that the BN had very few supporters present and i still think they had at most 2000 to 3000 supporters.