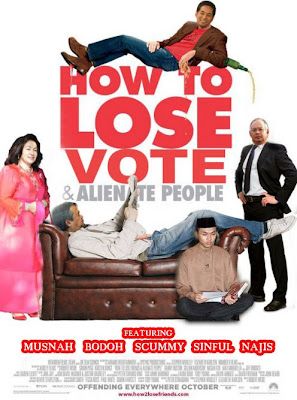 They use the religion that they so professed, they use the Holy Book, they use the holy grounds and the name of the Almighty all for the sole purpose of destroying the reputation of another being just because he has offered to serve his country and in so doing challenges this dreadful government of the day. This act is despicable!

And that Anwar did not join them by swearing on the holy book as this profanity (Unholy and defile the dignity of the religion)of doing so is in contempt of God. Anwar has shown he has the dignity and respect for the religion by not stooping to such low down actions and has stood his ground and is honourable.

“They (hypocrites) have made their oaths a screen (for their misdeeds): thus they obstruct (men) from the Path of Allah: truly evil are their deeds.” (Quran: 63: 02)
(requote from Ahmad through Peoples Parliament)

They use money to coerce and can be arguably interpreted as an act of bribery or as a report from malaysiakini titled "Money and Groceries for Vote".

They use Fear by bringing the Commandos and the Special Forces (UTK) to this by election and is seen as an act of intimidation and some voters might be even scared of coming out to vote with gun carrying soldiers and special forces on the streets of Permatang Pauh.

They show their might and anger on the people by threatening police investigations on sedition an oppressive laws they constantly use or threaten the people with. And they threaten to pull back the reduction of subsidy on fuel prices just because the people ask a few more questions.

They are without compassion and will throw the people in jail with the use of another draconian law of the ISA as with the hindraf detainees to show their might, they don't care that these people has got families and children to feed and are in pain and sufferings.

They divide the people through their calls for race supremacy over others as their objective is most to hold on to the powers that is not theirs to take but it is the People's right to give. This by election shall bear witness to the Power and Wisdom of the People.