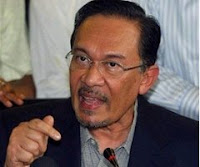 Malaysian opposition leader Anwar Ibrahim said Wednesday he had been informed he would be formally charged with sodomy on Thursday -- a crime punishable by up to 20 years imprisonment. "They are charging me tomorrow. It's for sodomy," Anwar told AFP, adding that the authorities had informed him of the move in a letter.

Calling it a sham trial, he blamed Prime Minister Abdullah Ahmad Badawi for orchestrating the trial in order to protect himself (Abdullah).

"This is a man under siege - and he sees no way out but to deflect the attention of the Malaysian people with a sham trial against me," said Anwar at a press conference held at PKR headquarters this afternoon. "I hold the prime minister responsible for bringing damage to this nation with this sham trial," he said.

"We are also informed that some individuals within the Prime Minister's close circles are adamant about pursuing this case."Their involvement further undermines the credibility of the case and proves that the entire conspiracy hatched against me is politically motivated," he added.

The former deputy prime minister also said that he might have to be absent from campaigning as well as during polling for the Permatang Pauh parliamentary by-election as a result of the court case against him.