ITS ALL UP TO YOU NOW - PERMATANG PAUH 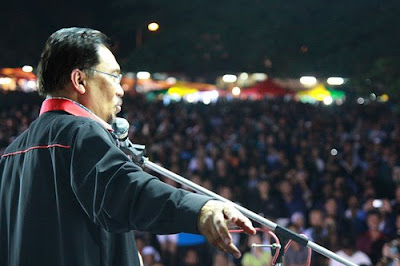 After 10 days of campaigning Anwar Ibrahim ended with an epic rally with more than 20,000 people despite the light rain as reported by Gus on ground zero.
BN side have been relatively quiet as their tactics of personal attack on the sodomy issues backfired on them and the results will show tomorrow. BN media controlled machinery was very annoying churning out Saifool's swearing on the quran incessantly and up till now on the Bernama TV they are still on the same topic and this time it is the Director General of Health Tan Sri Dr Ismail Merican trying to discredit the Pusrawi medical report. (rubbish always comes out of RUBBISH). And it was kind of silly as in all their ceramahs and operative stations they will have the Fool swearing played on TV over and over.
Allegations of BN's dirty tricks are the talk here amongst the people in Permatang Pauh and you can read more HERE and HERE. Anwar himself has called for caution, warning that more dirty tricks could surface between now and polling day. “Don’t be surprised at what else they could bring up.” He highlighted cases of certain people going around photostating and collecting the ICs of voters.
It will be a definite win for Anwar, the question is the impact of that win and if a bigger majority could be obtained over the last election of 13000 would be considered a huge success and anything from 18000 to 20000 would be construed as the Knock-Out Blow for BN . And above that number of 20000 will be the Killer Blow and you can start saying bye bye to some of those guys in putrajaya.
Well now its all up to the 58459 people of Permatang Pauh and tomorrow will be a historic day as we awaits the result in quiet anticipation.
There will be results streaming in direct from polling stations to the wharf tomorrow from 6pm onwards as the votes gets counted.