Don't Blame us for the Haze - Indonesia 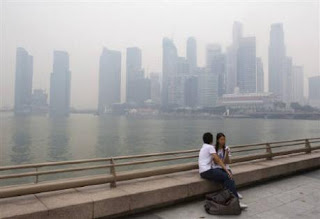 (Unhealthy Haze in Singapore)
Don't only blame us for the Haze said the Environment Ministry of the Indonesian government, we had discovered 13 fire hot spots in Sarawak, Malaysia.
Singapore has been covered in thick smoke this week while its three-hour Pollutant Standards Index recorded a rise to an “unhealthy” range of 108 as of 6 p.m, much higher than 80 on Wednesday, which was the worst since 2006, as reported by Reuters.
Malaysia has push the blame on poor air quality in some of its southern towns on fires on Indonesia's Sumatra island.
“We have not determined if the source is from fires in Riau. We still need to check,” Indonesia's  Environment Ministry deputy minister for environmental communication and people’s empowerment Ilyas Asaad told reporters at a press conference.
“It is still a one-sided complaint from Singapore or Malaysia,” Ilyas said, in response to statements that the haze had come from Indonesia.
Singapore Foreign Minister George Yeo telephoned his Indonesian counterpart, Marty Natalegawa, to express concern about the haze and reiterated Singapore's immediate readiness to help Jakarta put out fires on Sumatra.
"Minister Yeo informed Minister Marty that the PSI went over 100 yesterday and cases of respiratory problems including asthma had increased significantly," the Foreign Ministry said in a statement.
A reading above 100 on Singapore's PSI, or pollution standards index, is considered unhealthy.
Meanwhile to help you cope with the haze in a fashionably healthy way, Singaporeans designers has launch the latest men and ladies collection for the annual Haze season. 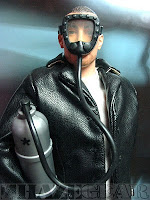 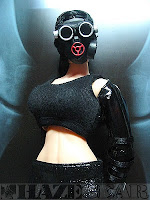