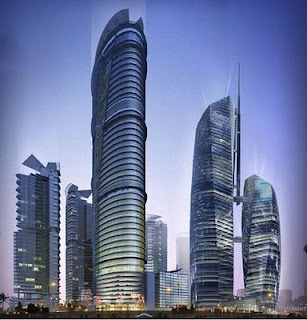 (The New Felda Towers at Platinum Park)
﻿
This is a frightening budget that is laced with potential asset bubble creation, the Najib’s administration seems to be throwing caution to the winds with increased spending on the economy and on implementation of more mega-projects.
The mega-projects that is on stream in the country is frightening and we will name them as we go on, Najib is making Mahathir look small as compared to the numerous mega multi billion expenditure during his short administration, when other nation are being cautious in this time of global economic uncertainty, Malaysia is all go like in an F1 Race.
One thing you can take note of the Malaysian budget is that they will always for certainty, spend all of the budgeted expenditure. The budget will be fully draw on or many a times overspend the budget with objectives falling short. They will spend all the budgeted expenditure and will fall short of economic objectives and a example will be the NEP after more than 30 years and the objectives are still reportedly far behind but the monetary allocation budgeted for the objective have all been spent many times over and today the majority of the household are living in hardship, much worst of than before.
We are a nation consistently recording a budget deficit and is borrowing huge amount to finance this deficit, although they have announced a reduction in deficit slightly to 5.6 percent of GDP for 2011 but the borrowings will be the same if not more due to the growth of the GDP of 7% in 2010. This will add to the national debt which will surpass the RM400 billion in cumulative debts. And we will have to finance this debt and interest payment alone will easily be over RM 25 billion per annum.
Note that the national debts are for direct government borrowings and other indirect borrowings on federal government guarantees might not have been accounted for like the PKFZ as an example, that is to say that other borrowings from GLCs and other agency or private entity which might have financed their mega-projects through government guarantees might not be reflected in the government accounts and could be contingent liabilities and are not reflected in the books..
On top of this deficit the operational expenditure will yet again increase by 7 per cent or 10.6 billion ringgit from 152.2 to 162.8 billion ringgit, this is just administrative expenditure and does not contribute directly towards the development of the economy but instead shows a lack of prudence and operational inefficiency in the administration despite of projecting a slower economic growth of 5 to 6 per cent in 2011. Operating expenditures has more than doubled since 2004 when it was at about RM80 billion and now it is more than RM160 billion.
We will not go into details of the budget here as it is already written in by the various media and it is the intention to focus on the various multi billion mega-projects from the Najib government. And as usual they will not provide details like how the project is being funded until only when something goes wrong or when someone exposed some wrong doing.
As usual no details of any tender of the mega-projects are undertaken and are probably awarded on a friendly basis. 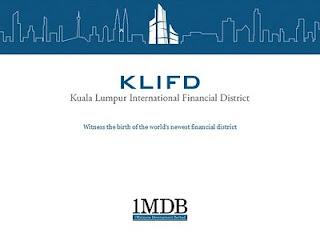 Let’s look at some of the mega-projects as announced today as follows:
You can see that non of the above projects are private sector initiatives and all are government projects undertaken by government controlled entities like PNB, EPF, Khazanah and the new 1MDB or GLCs. And in the tradition of the Malaysian business culture, these projects are than handed out as usual to friendly parties with funds provided by or through the government. So where is the Private Sector as the engine of growth unless you deem PNB and EPF as private sector?
Some mega multi billion budget allocations are:
·        Education: For Restructuring and Strengthening RM 29.3 billion to the Education Ministry. RM 10.2 billion for the Higher Education Ministry and RM 627 million for the Human Resource Ministry.
·        Education: Another RM 6.4 billion to build and upgrade schools and etc.
·        Health: RM 15.2 billion for new hospitals and etc.
·        Defence: Allocated a total budget of RM 9.1 billion which is a reduction from RM 10.5 billion.
·        Corridor: RM 850 million for infrastructure support to the corridor and regional development.
·        1Malaysia Training Program: Allocation of RM 500 million. What’s this?
·        RM 1 billion allocated for the launching of the Bumiputra Property Trust Foundation. (No details provided).
The Total Budget allocation for 2011 is at RM 212 billion which is an increase of 2.8 per cent from 2010.
BN has been churning out huge mega-projects and some are still in the incubation stage like the:
More multi billion projects that have been approved and about to be started or in progress like:
This are just some of the mega projects as listed above and there are many more in the Klang Valley that will be quite lengthy to list them all here.

Now the wonder of Malaysia is that most of these multi billion mega-projects will all come on stream at about the same time as though like they are in real hurry to get it off the ground, most of these projects are all in the Kuala Lumpur area and you be the judge whether all these projects are sustainable.
Anyway, the advice to any investor will be to wait patiently on the sideline, waiting to pick up on the cheap when things go Bang! So, hurry keep your cash safely er.. somewhere really safe that it won’t be devalued…

Hark! the Herald Angels Sings.
Posted by Unknown at 5:18 AM

In the above article, quite a number of questions were asked. To me, the answers are rather obvious. It will be a case of history repeating itself. Mark my words, everything will be exactly the same as during the time of MahaLANUN. The only difference is that now we have a new 'lu tolong gua and gua tolong lu' factor. All the big time cronies (including a daughter of a VERY IMPOTENT PERSON from Perak) as usual will get the lion's share and the hyenas (read sycophants) around them will get the bones with a little meat still attached. Of course we will also be hearing that the gomen is bailing out this and that projects. Currently three good examples out of the numerous which are bleeding the nation profusely are the national automobile venture, PKFZ con-works and also the Bakun Dam which we will be selling for a song to the SarawakLANUN. Inspite of being warned beforehand by the various experts, MahaLANUN (using the economics knowledge taught to him by his primary school teacher) went ahead. Now we are paying dearly for his follies. Fools never learn. No wonder even one of their kind said that Malaysia will go bankrupt in a few years time. To save Malaysia, this gomen need to change or be changed.

Congrats, you must obviously have spent a great deal of time & effort to summarise all these phantom mega projects !

But we think to complete the 100 storey tower may take more than 50 years, before even the first 1/2 past 6 piling can start, as Najib would have fled overseas without Rosmah

Great details but one thing is missing, based on the value of this super duper mega projects what will be the number of migrant workers legal and illegal required. I won't be surprised that it will go up 3 fold. Get a job in the immigration department now !

I am more worried if my EPF money can buy a loaf of bread when it matures?

There is nothing we can do but sit and watch.

Like most working class who have 2 jobs to survive,instead of Gardenia bread now we go for hypermarket white bread costing 50 sen less,a lot more food items we have to buy from pasar malam now and clothings too....we are losing purchasing power things are getting more expensive.The poor families will be worsed off.But my dear government is spending like no tommorrow and its many ministers full-steam ahead with big bucks spending.Please dont force us work 3 jobs to survive.

To have this kind of money to build mega projects is unrealistic. First, the budget is built on the assumption that the growth for 2011 would be at 7%. However, what is not known is that there is a strong probability of another global slowdown starting at year end coupled with the incoming currency wars as well as the US printing money by next month. The only probable thing now is that to get that bulk of the RM212 billion, Malaysia will have to print money, and in other words borrow money. Malaysia still relies on investment from the West to come in but in actually, investment from the West could end up as mere worthless paper money. If Malaysia decides to pursue mega projects but gets bankrupt in the end, who is to be blamed? Economic hitmen who advise BN government or bad decisions made by BN?

Its remarkable that you are able to present the financial condition in such simple language that is easily understood.