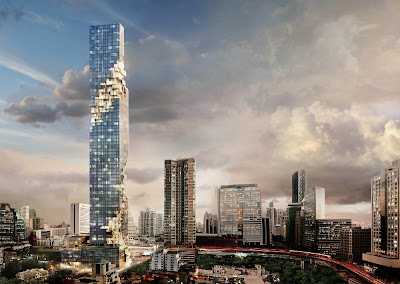 (illustration only and not the actual design)
There has been quite a buzz going around of the new 100 storey super skyscraper known as the Warisan Merdeka development since the announcement in PM Najib Razak budget speech last friday. 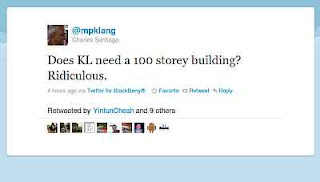 Many has described the project as wasteful and frivolous with the Member of Parliament, Charles Santiago calling it a Ridculous project.

The popular internet site of The People's Parliament is conducting a poll and the last check showed 95 % of respondent voting against the project. (HERE)

Another popular blog, masterwordsmith had a good account raising highly relevant questions on the proposed project describing shock and awe on the news of such a wasteful developmen. (HERE)

The proposed development is expected to commenced construction by early next year and to be completed by 2015 at an estimated cost of RM 5 billion. The site of the proposed tallest building will be at the old Stadium Merdeka and Stadium Negara location. The Warisan Merdeka development will incorporate the preservation of the two stadium as a heritage site as depicted in the architectural model below. 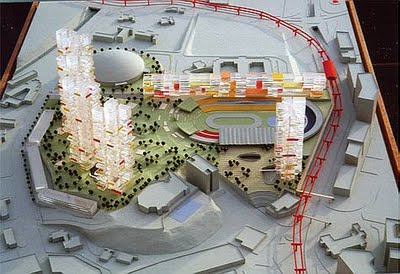 (Design study model of the Warisan Merdeka.)
Note the Stadium Negara which is an indoor stadium of dome shape structure and the Stadium Merdeka an open stadium of oval shape in center of photo. The glass like model structure are the new buildings including the 100 storey skyscraper.
Posted by Unknown at 3:17 AM

PM tries to follow Dr.M footstep by creating another icon during his reign.

If it is a 100 storey "Warisan Rakyat" which is a 100 storey apartments for the Rakyat, I will fully support it. But, since it is going to be for commercial only, why not build 200 storey ? The reason being if you build 100 storey now, the next PM will build 120 storey to surpass you and the following PM will build 150 storey to surpass his predecessor and never ending. So you build 200 storey now, it can last you for a few tens of decades.

That also can be classified as exceptional project, not easy to audit the costs. Safer to makan lah.