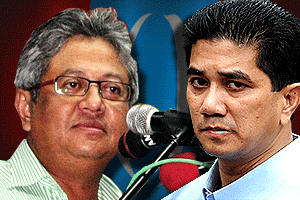 “Good government will always help the people to discard hypocrisy and cunning. It will deter those with a pretense of wisdom from acting arrogantly and in such a way the country will be well administered.” - tao te ching -
The fracas at the PKR election is an indication of a party that is deficient of an effective management and leadership. PKR has shown a crude and ungentlemanly approach to politics in the run up to their leadership election.

It is a responsibility of the party management or the leadership to instill virtue and benevolence to all leaders and to the grassroots. This is the foundation for the construction of a positive party culture.
Azmin’s approach of trying to manufacture mass support from other leaders of MPs and assemblymen is an ungentlemanly conduct, is seen to be manipulative and insensitive to the feelings of another fellow candidate. He is seen here trying to ride roughshod over a fellow comrade of the same party by scheming and plotting.
Azmin thinks he is being strategic or tactical and this is exactly a distorted perception and a misconception of good strategies, you are contesting against a fellow comrade and this is not a contest of enemies, it is a contest amongst fellow members of the same party where one is expected to show some tolerance and respect.
If anyone has a desire to become a leader, that person must show that he is sensitive to the feelings of every single party member. The leader must understand the party struggle and regard every member as his beloved family member.
Zaid must succumb to the party struggle and ideals and respect the hierarchy of the leadership structure, personal ambition and ideology must first take a back seat and to be blended in with the party after having a thorough comprehension of the greater view.
Zaid was seen to be retaliating to the action of Azmin’s lineup of power support from other leaders and than the whole fracas started with many others joining the fray with pronouncement of support against each other. Zaid, actually fell ploy to the illusion created that Azmin had the support of Anwar and other senior leaders than started lashing out in retaliation.
Above all this squabble PKR is still viewed as the party moving towards a greater democracy; it is the only political party that had empowered every single member with a full democratic voting right. Unlike the country under the UMNO led government with its gerrymandering ways that has derogated the value of the voters and corrupted the very electoral system of the nation.
Malaysians today have been cheated of their votes and not all votes have the same value and are not equal to one vote count, our electoral system has been so badly manipulated that it is no longer one man one vote. (Read Malaysian Voters worth 5 cents HERE).
PKR is undergoing some positive transformation and there will be challenges along the way but it is for certain that the true will and sincerity of the majority shall overcome and progress will be made for a better political system and culture.
There might be personal differences amongst contending leaders, who doesn’t, we all have differences even with brothers and sisters, but at the end of it, the greater cause of the party, people and nation will prevail.
Politicians too need to have continuous education in order to inculcate the wisdom of virtue and benevolence that be the root of wisdom and good governance. For those who wish to understand more of strategies, please read the Quintessence of Strategy HERE.
Posted by Unknown at 4:34 AM

Azmin is typical umno style politician...dirty fella with no substance.
Though Zaid was in umno, well its for business purposes but he even resigned from a minister post on principles.
Azmin shud be doing his conniving strategy in GE, and not within. If Azmin wins the DP post, I will not vote for PKR come GE13