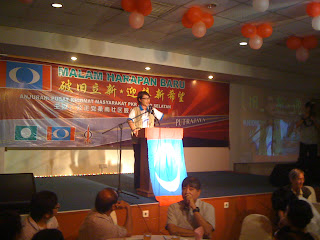 You have to be here to see this event, a sold-out dinner talk with tables costing RM600 to RM1000 per table  for ten held at the popular TaiZen Restaurant in Taman Molek, just at the fringe of the Johor Bahru city district. There were over 120 tables in total which is about the maximum of tables that could be packed into this hall like restaurant and the food which is pork-free caters to the all Malaysian crowd was delicious and of good quality.
The people who paid good money to attend and listen to the well received speakers consist of all races from Businessmen, local popular Datuks, Professionals, Employees, Families and Civil Servants, yes that's right, civil servants from the local government office and they were quite a few number of them much to my surprise. This is a real Malaysian crowd with many tables seated with mix races that makes for a real pretty sight and to find it here in Johor Bahru is a real pleasant revelation.
The speakers main table was much visited by the people seeking photo shoot opportunity with the PKR politicians and autographs, Zaid Ibrahim was kept busy signing his books that were purchased by the people sold in the entrance foyer and even on his way out after his speech he was continuously stop by the audience requesting for photo shoot and to autograph on his book.
Elizabeth was the next to speak after Zaid Ibrahim and was much loved by the crowd with her natural and relax charm, Elizabeth, the darling of the crowd advised the people to be wary of the main stream media and their crooked spin against  Pakatan Rakyat reminding them of the drop in ranking on media freedom under the umno led government.
She further expounded on the RM 5 billion 100 storey tower of Najib and the other mega-projects as a mismanagement of the people's money calling on Malaysians to voice their protest against these wasteful projects. 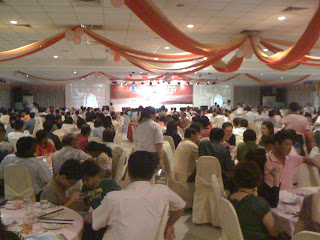 (Tian Chua - A Hero Well Received)
Tian Chua was very well received and had to go round the tables with people requesting to be photograph and shaking hands to everyone in the hall just like a movie star.
Tian Chua was the last speaker of the night and his speech was continuously interrupted with cheers and loud applause. Tian has come a long way as a speaker and has confidently grown to be now a well respected politician able to hold his ground against any from the BN camp. He has impressed the audience calling on them to stand up against the oppressive and corrupt governance by making sure they and their families and friends vote correctly for a new Malaysia.

My suggestion to Pakatan Rakyat is to invite one or two people from the blogging community to witness such events that were being organized throughout the country. The sight of the Malaysians attending such events exudes much confidence towards the founding of a New Malaysia.

Due compliments must be extended to the local party members for putting together such an excellent and successful event.

I am very much impressed. Looks like there is hope yet.