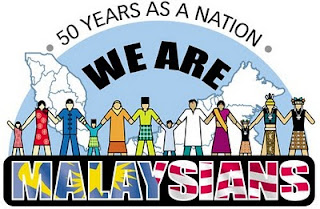 Malaysia population estimates stands at 28.6 (28,608.6) million as at 31st Dec 2009 according to the Department of Statistic (DOS) Malaysia.
In breaking down the numbers you will find that Malaysia has a very young population with a median age of 25 years and some details as follows:


The Election Commission has announced that there were 11.08 million registered voters and there were about 4.4 million eleigible citizens who has yet to register to vote.
There are more than 500,000 citizens reaching the age of 21 every year and will be eligible to vote, this estimate is derived from the breakdown of the age group from 20 to 24 which is at 2.54 million. So the "Bankit" guys might want to try their voter registration at Universities at least there might be much more concentration of new eligible voters in this places (mostly second final year students) and they will be from all over the country.
There are slightly more Male over Female at 14.56 million males over 14.05 million females, so guys don't take more than your fair share otherwise we will need to import more females.
What is intereseting in the DOS estimates are the grouping of the various figures and definition as follows:
Total Population at 28.6 million and Malaysian citizens at 26.5 million giving you a 2.09 million Non-Malaysian citizens. It is an assumption that we have legal non Malaysians who are given residences permission or work permits to stay in the country. So who are this Non-Malaysians as they make up quite a substantial of about 8 % of Non-Malaysian citizens and even more than the total number of Indians in the country of 1.95 million or about 7 %.
The classification of Malaysian population as per the DOS are; 1. Malay at 14.58m or 55 %. 2. Other Bumiputra at 3.16m or 12 %. 3. Chinese at 6.48m or 24.5 %. 4. Indians at 1.95m or 7.4 %. 5. Others at 0.34m or 1.3 %  and 6. Non-Malaysian at 2.09m or 8 %.
Some Population Trivia:
Census are conducted every Ten years and the next Population and Property Census will be initiated on the
6 July 2010 (Census Day).
Posted by Unknown at 12:21 AM

Email ThisBlogThis!Share to TwitterShare to FacebookShare to Pinterest
Labels: Politics and Election, Racism

This is 1malaysia mah..

The result is different population growth.

Mamak has achieved his goal, political control not birth control.