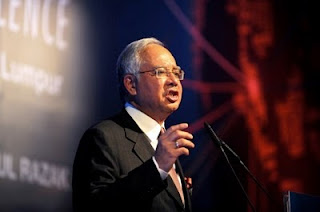 Don't you ever get sick of the term "Malay" and "non-Malay" as a form of description on Malaysians and especially so coming from the Prime Minister himself and is this what the 1Malaysia crap is all about? Than you have Bumiputras, other Bumiputras and Non Bumiputras, The Indigenous and The Other Indigenous from Sabah and Sarawak, never have there ever been so many varied terms to describe the people of one nation and you would assume that 1Malaysia was about being one with the nation or in unity as one people and one national that is Malaysians.
And that is why the ancient sages has premeditated that you can't rule with a false ideology and that there must be truth and purity in thought leading to correct and exact deeds or actions. Purity of thought will lead to positive actions that are in sync with the order of heaven (nature), and if one is with nature than the myriad of people will follow as the water that flows towards the streams and rivers than to the seas and oceans.
This is what Najib on the eve of his first anniversary as the Prime Minister of Malaysia has finally "pecah lubang" and his lack of wisdom on the philosophy of governance and leadership shines through brightly repeatedly with the unnecessary jabber.
One day he announces a new model and than the next he shows you the old jalopy model and repeatedly says that it is new. Go read his interview here with AlJazeera as reported from Malaysian Insider HERE.
Najib has repreatedly shown his indecisiveness and wavering ways in the leadership of first his party and in the government and the talk is that he is unable to command the respect and control the warlords in both party and government. He is going to be the weakest of all the leaders before him, yes, he is going to be even worst than the sleepy head before him. And all this show of weaknesses is going to force him to an early retirement.
The defence of his deputy has exposed his weaknesses and fear of the lost of support from the deputy and the defence of Perkasa is the pits. There were talk that the expose of the PM's department dealings with APCO were resented by the deputy and his gang and much grouses were hear in the corridors of power.
Najib says "if you listen carefully than Perkasa is not so extreme" and added that "we can accomodate Perkasa" and when asked about the threat from Perkasa directed at him Najib says that Perkasa is supportive of Umno. He further added that 1Malaysia is to protect malay special rights. Can you believe it? Ah.. small man always speak with fork tongue. The superior man speak with his heart .
Nicholas Zeffrey, president, American Chamber of Commerce Malaysia, said: "People (Investors) told me they are leaving the country. I have had more people telling me that they are doing that in the last few months...than in the 20 years I have been here."
When asked why, Mr Zeffrey replied: "They do not see a future. They are not confident about Malaysia, economically and socially. That is how important this new economic model is - it is not just foreign investors, it is Malaysians."
Read the Transcript of the Najib AlJazeera Interview HERE
Posted by Unknown at 6:44 AM

Hi Antares,
haha can't argue with that but trying to figure out that corporatocrat word. : )

Anon,
He probably did not hear you, i dont think he visit this site. And you are right.