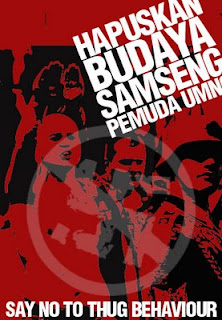 We were at Pakatan Rakyat's closing ceramah at the KKB mini-stadium where more than 50,000 were gathered to mark the end of the intense campaign for the Ulu Selangor parliamentary seat. It was a heady, jubilant atmosphere charged with positive feelings about the outcome of this massively significant "referendum" on the nation's political future.


Because of the immense crowd, me and my friends opted to leave the stadium before Anwar had finished his fiery speech. When we got back to Kg Pertak, we were shocked to find the entrance blocked by a group of men who had parked a couple of motorbikes across the road.

A couple of Temuan youth had been assigned RELA T-shirts and flashlights and instructed to stop people from entering the village. A group of imported Umno heavies (some from Pekida it appears) stood around to provide additional muscle power.


What's utterly sickening is the vicious and violent energy Najib's goons have brought to Malaysian politics. Never have I witnessed such despicable strategies, born of abject fear of losing power.