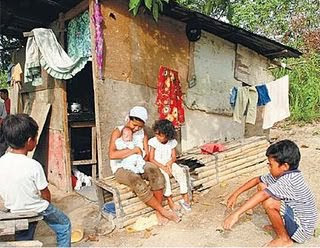 The many years of Barisan National rule over the nation has impoverished much of the populace and Hulu Selangor is one good example of the result of the umno led government.
If you were to travel out of the cities and to the rural districts like Hulu Selangor you will find much poverty like that of T.Devi, 38, who works in a palm oil estate and earns a combined incomed of a meagre 600 ringgit a month.
When ask who she will vote she said: "I am not sure who I will vote for. I will vote for whoever gives me financial support." (From Channel News Asia).

In the previous few by-elections in the rural districts, we have seen much people living in destitute and they are  Malaysians from all races, we have seen very poor malays, indians, chinese and orang asli in the rural districts.
After more than 50 years of Barisan National governance there are still about 500,000 families or 8.6% out of  the total of 5.8 million households living in abject poverty earning a combined monthly income of below 1000 ringgit.
And a further 1.7 million households or 29.5% with a combined monthly income from 1000 to 2000 ringgit. This two group adds up to over 38% or 2.2 million household. After more than 50 years of independence we still have 2.2 million household or about 10 million of the population in poverty.
Posted by Unknown at 3:07 AM

Thanks for this heartbreaking photo and the information. Do give us more on HS. The rakyat need to know the true picture!

All the best to you and other Barisan Rakyat bloggers as you all work at ground level.

Thank you for your comment. May God bless you always.

wasup guys,
Am i missing something here?

thanks masterwordsmith..just doing a little bit for people and country where we can.