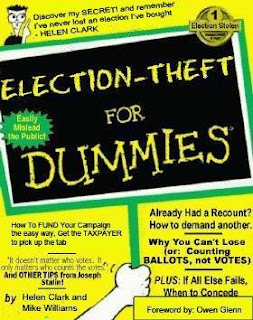 If we are on a level playing field than there will be no reservation as to who will win but we are not on a level playing field. In this field even the Referee is playing against you.
For a free and fair election much is dependent on the independence of the Election Commission which is entrusted with the sacred duty to safeguard the rights of voters. In Malaysia the members of the commission are all appointees of umno and act to the wishes of their political masters.
It was reported that some 14,000 voters in Hulu Selangor have had their polling stations changed and moved to new polling stations without the voter’s knowledge and this can be construed as Electoral Fraud which includes transferring 228 voters out to a different constituency.
The Election Commission has up till today not provided an acceptable explanation. This is a blatant act by the election commission.
The EC had earlier announced the withdrawal of the accreditation of “MAFREL” the independent election watchdog and said that they will not be appointed for the Hulu Selangor by-election.
You can’t help but to relate the incidence of the dislodge voters and the “dismissal” of the election watchdog.
Polling day is on Sunday and what can be done to ensure that the voters get to exercise their constitutional rights to a fair vote.
There is much amiss with the Malaysian electoral system, for any electoral democracy to work the underlining requirement for a free press must be present whereas today all major TV and Radio stations, newspapers and most print media are in the control of the ruling parties and their cronies.
If Pakatan wants to win than it must seek to resolve the issue of the 14,000 voters.
Read MAFREL HERE  Read Bersih HERE
Posted by Unknown at 1:06 PM

It seems clear to me, and for the matter any sane person, that MAIKA/OCAB shares are worth a hell of a lot more than TSG’s $106 million offer.

The $64,000 question is why Samy Velu, Paari Vell and the Board of Directors of MAIKA appear NOT to be interested in maximising returns to their long-suffering shareholders which includes themselves, by supporting the lowest offer??!!

Additionally, the minimum premium a buyer should pay for a controlling stake in Maika/Ocab is 50% of Ocab's NTA of $103 million, i.e. the total minimum consideration should be RM 150 million as:-

1. The potential buyer would be acquiring a controlling stake (74%) in Ocab as opposed to being a mere passive investor relying on dividend income for a return.

2. In Malaysia you cannot secure a licence for owning/operating an insurance business without Bank Negara's approval, which includes vetting the shareholders and board of directors!! Thus the market is restricted for insurance business start ups and acquisitions, justifying a higher premium for a new investor.

3. Ocab's Unearned Premium Reserve as at 31st December 2008 stood at $ 48 million which is quite healthy compared to its paid Up Share Capital, Share Premium and Reserves of $103 million. Thus future earnings are reasonably assured. We do not know what other general provisions are included under Ocab's reserves.

4. Ocab's Properties and Investments totalling $316 million are likely to be worth a lot more than their book writen values.

5. In 2000, Bank Negara's guidelines for bank and financial institutions mergers was for pricing to be in the region of 1.5 - 2 times revalued NTA.

6. Vell Paari, Maika's CEO and a director of Ocab, increased his beneficial interest in Ocab by 111, 250 shares in 2008 as disclosed in Ocab's audited financial statements.

All the above leads to the conclusion that Gnanalingam's offer of $106 million for a 74% controlling stake in Ocab, a mere 2.91% premium over its NTA of $103 million, is derisory, disingenuous and an attempt to put one over many ill-informed Maika shareholders.

The timing of Gnanlingam's offer announcement was surely calculated with one eye on the by-elections at Hulu Selangor?

What is astonishing is that Samy Velu, his son Vell Paari and the board of directors of Maika, and PM Najib as well, are all supporting Gnanalingam's pathetic offer!!

Whose interest should Maika directors be rooting for - its shareholders' or that of Gnanalingam? And why are they reusing to go for a sale by open tender?

Is there a deal behind the deal?

donplaypuks®
we are all of 1 race, the Human Race

I'd appreciate if you give max publicity on my letter published in Mkini today. The voters at HS need to know! Thank you.

The salient facts about Tan Sri Gnanalingams’s (TSG) recent offer to buy out ALL MAIKA shareholders are as follows:-

4. MAIKA’s investment in OCAB’s share capital is 74.165% or 74,174,640 shares, i.e. MAIKA is OCAB’s Holding Company as it has both more than 51% equity shares and control in OCAB. MAIKA’s CEO Vell Paari a/l Samy Velu also sits on the Board of Directors of OCAB.

5. Prior to TSG’s buyout proposal, there were two other offers to MAIKA as follows:-

b. $149 million or $ 2.01 per share by Usaha Tegas S/B, the holding company of tycoon Tan Sri Ananda Krishnan.

The Salcon offer was frozen by a court order taken out by NESA Co-operative, MAIKA’s single largest shareholder who had objected on the grounds that MAIKA’s 74% investment in OCAB had not been independently valued.

NESA had recommended the investment in OCAB be sold by open tender. NESA also revealed there were two other parties interested in acquiring OCAB’s shares, one from Europe and another from Australia.

As to the $149 million offer by Usaha Tegas, apparently MAIKA rejected this offer as it could not accept certain pre-conditions insisted upon by Usaha Tegas, thought what they were has not been revealed by MAIKA’s directors.

In the light of the above, I demand the Board of Directors of MAIKA explain:-

1. Why they think TSG’s offer of $106 million is suddenly acceptable to them when they unequivocally know there are local market players in the insurance business and foreign parties who are willing to pay more?

2. Why are they unwilling to offer the MAIKA or OCAB shares for sale by open tender with a reserve price of say, $150 million, given the Usaga Tegas offer?

If as TSG says, MAIKA’s debts are $30 million, the net minimum proceeds of $120 million would be a fair and handsome reward to MIAKA’s shareholders who for some 20 years have received no dividends, while there was a period when their CEO was paid a remuneration of $15,000 per month?

As to TSG being quoted as saying he’s doing national service, he contradicts it by saying he will need six months to find another financer which suggests he is looking at flipping the MIAKA/OCAB shares for a quick gain!! So much for national service!!

"Entrepreneurs" like TSG may do charity work and make sizeable donations from their profits and gains, but their natural predatory instincts mean they will always squeeze the juicy orange for the best deals for themselvesl!