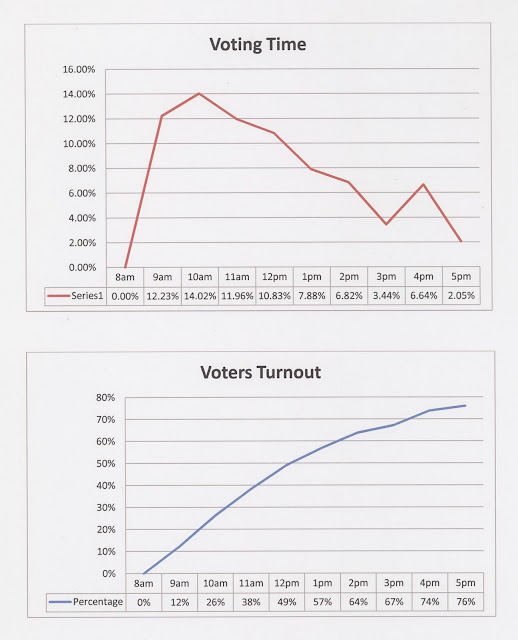 It is a healthy number at 75.87% as it will be more worrying if the turnout is any higher as a comparison on the previous two by-elections where numbers of voters turnout reported was at more than 80 % and the first one Pakatan at Manek Urai almost lost winning by a slim majority of about 60 votes and the Bagan Pinang Pakatan lost with an unexpected increased majority.

The estimate of voter turnout should be not more than 75 % (max) preferably at 70%, which will reflect the total average voting turnout trend. Every percentage change amounts to 645 voters and five percent equals to 3225 voters.


Will update later. having problem trying to load chart.

Update:
Ok got the chart up and got to run off.
The chart to look at is the voting time chart and it should be a smooth gradual flow without any spike and you  will notice that there is one spike at the 4pm chart which almost double the numbers of the 3pm chart.
This spike has brought an additional of about 2500 votes or more.
Posted by Unknown at 7:21 PM

I read you Hawk, you have seen this result Comng but what is important is Pakatan Rakyat have to do a study of their weakness and to be more clever.

Hawkeye,
You said that if the turnout is higher you be more worried.
Are we not hoping for a higher voter turnout to vote against BN or are you saying more people will vote for BN.

Sad day, many reasons but PKR must change n listen to the masses...

Maybe Hindraf support did pull off the rug fm our feet, we need all the support and learn to respect all voters and PR partners.

Its never too late to change and lets focus on policy matters for the success that we need for the next GE.... Get the promises fulfilled fm 2008must be the first task at hand.

The national average voters turnout is about 75%. Anyway can you trust the EC's electoral roll which is outdated with a lot of dead voters and etc.

A man who dares to barrens anyone hour of time has not discovered the value of life.

To be a noble lenient being is to from a make of openness to the in the seventh heaven, an ability to guardianship undeterminable things beyond your own pilot, that can lead you to be shattered in uncommonly extreme circumstances for which you were not to blame. That says something exceedingly impressive about the condition of the righteous life: that it is based on a trust in the unpredictable and on a willingness to be exposed; it's based on being more like a shop than like a prize, something rather dainty, but whose acutely precise handsomeness is inseparable from that fragility.