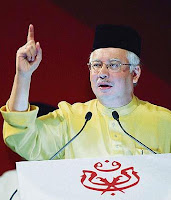 (Extract of a report from TheWall Street Journal)
As importantly, Mr. Najib mentioned education reform—an area in which pro-Malay admissions policies have made meritocracy a dirty word and denied opportunities to bright minority students, especially from the Chinese and Indian communities. Malaysian companies often complain about the lack of skilled labor, and the country's universities are a big part of the problem.
Mr. Najib has made these promises before, and there's no evidence beyond his words that he has the gumption to press ahead. He announced a small services liberalization in April last year, but it wasn't the big-bang reform that Malaysia needs. Not much has happened since. The markets yesterday greeted the New Economic Model with a yawn.
Most investors simply don't believe Mr. Najib is willing to take on the biggest entrenched interest of all—his own political party, the United Malays National Organization. For decades, UMNO has monopolized power by divvying up economic spoils on political and ethnic grounds. If Mr. Najib is serious about reform, that's the place to start.
Posted by Unknown at 4:48 AM

have been listened to this for so long make me no feel anymore, so boring.Same trick don't work twice la, be creative and try some new trick la but guess we don't have that kind of brain yet in our leaders, Iyah!!!

even malaysians don't believe him so how can the investors blieve?