Malaysia's Corruption at its Worst 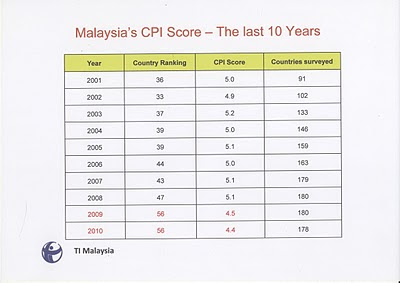 Malaysia is in the lowest rating ever by Transparency International in the latest Corruption Perception Index for 2010. Malaysia is seen plunging down in to serious corruption with an index score of 4.4, the index has a range of 0 to 10, 0 being highly corrupt to 10 being very clean. An index score of 4.4 is deem to be a "serious corruption score" and is rank at 56 out of 178 countries being rated.
As compared to Singapore which is jointly tied at the top spot with Denmark and New Zealand with a high index score of 9.3 being the cleanest of countries. 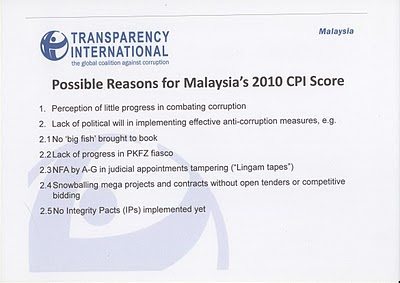 Dato Paul Low, the President of the local branch of Transparency International noted the plunge was serious not only when compared to the country’s perceived past performances but, more importantly, in relation to other countries worldwide and especially those within the Asean region.
Even tiny Brunei which was included in the CPI for the first time this year, outstripped Malaysia at 5.5.
Drawing special attention to neighbouring Indonesia, Low marked that though it ranks 111 and scored 2.8 on the CPI, the country’s corruption level is seen to be improving steadily under the administration of President Susilo Bambang Yudhoyono. 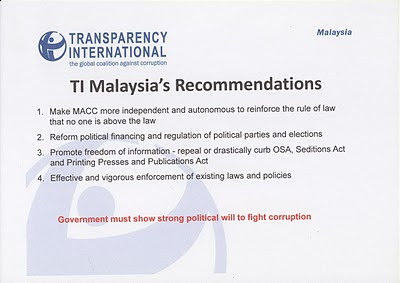 DAP Parliamentary leader Lim Kit Siang called Malaysia’s ranking the worst in 15 years and said it was a major blow to Prime Minister Datuk Seri Najib Tun Razak’s administration.
“This is a national shame and major blow for Najib’s premiership,” the Ipoh Timur MP said in a statement.
Dato Paul Low blame the federal government’s lack of political will in enforcing tight anti-graft measures.
He said intense scrutiny surrounding public scandals exposing money siphoned off public funds, from the long drawn-out multi-billion Port Klang Free Zone (PKFZ) project to the more recent double-tracking railway project, which went overboard by a whopping RM1.3 billion were clear examples that affected the increasing poor perception.
He said the impression the public gets is of double standards and selective prosecution, adding that the newly empowered Malaysian Anti-Corruption Commission (MACC) is only seen to be catching “small fish” and focusing on Barisan Nasional’s (BN) rival political parties.
“The Auditor General’s annual report highlights extraordinary public procurement abuses, but no action appears to have been taken,” he stressed. 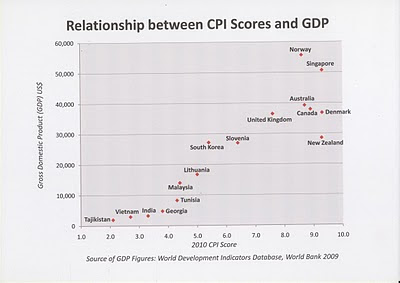 This chart shows a correlation between the GDP and corruption and clearly indicates that the least corrupt countries enjoy the highest economic wealth.
The chart above relates the wealth of the nation on per capita income based on Purchasing Power Parity (PPP) of the GDP, Singapore which is tied in the Top spot of the CPI enjoys a PPP per capita income of US$53,000 which is higher by 3.8 times as compared to Malaysia at US$14,000 .
Singapore's GDP per capita income at PPP is the fourth highest in the world and Malaysia is ranked at no. 58 next to Libya and Lebanon as rated by the International Monetary Fund.
Professor Johann Graf Lambsdorff of the University of Passau, who carries out the Index for TI, underscored the disastrous effects of corruption and gains from fighting it, saying, "Evidence suggests that an improvement in the CPI by one point [on a 10-point scale] increases capital inflows by 0.5 per cent of a country's gross domestic product and average incomes by as much as 4 per cent."
“Stemming corruption requires strong oversight through parliaments, law enforcement, independent media and a vibrant civil society,” said Labelle. “When these institutions are weak, corruption spirals out of control with horrendous consequences for ordinary people, and for justice and equality in societies more broadly.” - Huguette Labelle of TI.
If Najib is sincere in wanting to bring Malaysia towards a high income economy than he must seriously act to rid the country of corruption by empowering the MACC (Malaysia Anti-Corruption Commission) and making it fully independent and autonomous or otherwise all his talk of a New Economic Model and Economic Transformation is seen to be a Deception and a lot of Hog Wash.
Corruption Ruins Life, Take Action, Fight Back - Transparency International﻿
List of countries GDP per capita HERE
Posted by Unknown at 4:07 AM

It could be worse. If anyone not happy he/she got to go. What is left in Malaysia are the happy ones. Corruption is only western country perception. If I to follow the west I have to abandon my "anypow" giving. Is "angpow" corruption I don't think so. Crappy white man opinion.

Agree with Hawkeye, Najib stop all this Hog Wash! We the people are not idiots and will not fall for your Bullshit!

Hey, something is wrong with your site in Opera, you should check into it.

In the piggery farm, Looting is elite game, rent seeking is Bumi enterprise, hand-out is Bumi entitlement, paying tax are non-Bumi duties, enduring intimidation and harassment are parts of second class citizen experiences. Human Dignity not in the Kamus. Happy farming in the Bodohland.

Hey, Malaysia corrupt? Where got? We send a passenger to space and call him ASTRONAUT. I fly on aeroplanes many times a year and so can call myself a PILOT. So many Malaysians give and take money, so they GENEROUS lah. NOT corrupt. Got it?

Well like they say, in Malaysia payment for corruption is considered as COMMISSION (it's calculated as part of the Costs of a Project & is always taken into their accounting procedures - whether taxes are paid against these payments is another matter altogether!)and therefore, is LEGAL! Now Transparency Int'l should review our M'sian ranking based on this 'new' Fact!... and I won't be surprised Malaysia will rank TOP with S'pore if this 'new' criteria is taken into account. eheheheehehehehehehehee!!!!

Here is an Open Letter on Legal and Banking Corruption in Malaysia:
https://malaysiancorruption.wordpress.com

When you buy a property in Malaysia you are supporting corruption. Please read and help spread the word! This needs to stop!

The CPI low score for Malaysia is not just a wake up call to tackle corruption but also complements Malaysians' demands for reforms. Secondly, whoever says the CPI report is white man's crappy opinion does not really know what he or she is talking about.

white man, black man, yellow man, blue man, green man...this hs no basis and shows a level of stupidity, anyway everyone is aware that malaysia is a corupt country. Yes also Europe has coruption, but mostly on high levels, in malaysia however it starts on the low level. ever been stopped for speeding ?? ok i guess you get where i am heading,it could go on an on...you have to face the fact that this is a disease and it needs to be treated as a bad cancer. if you want malaysia to head into 2020, stop corruption now and cut this desease out of society and stop your compaining. always just complaining. get your lazy ass of the chair and do something !